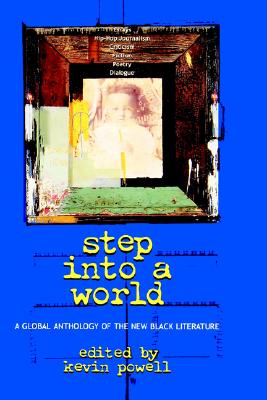 Step into a World: A Global Anthology of the New Black Literature
by Kevin Powell

Read Our Review of Step into a World: A Global Anthology of the New Black Literature

Read more about the contributors to this fantastic volume of work

From fiction writers, poets, journalists, and commentators, this absorbing anthology captures, for the first time, the new school of black writing, including established and award-winning authors like Junot Diaz, Edwidge Danticat, Danyel Smith, and Paul Beatty, as well as emerging voices from around the world. In addition to showing today's literary flowering, Step Into A World provides a window into the crucial issues of contemporary black life, including racial and sexual identity, post-civil rights politics, and hip-hop culture. Compiled by critically acclaimed poet, journalist, and essayist Kevin Powell, this groundbreaking book is a revelation.

Kevin Powell (Brooklyn, NY) is a critically acclaimed poet, journalist, and essayist. He is the former senior editor for Vibe, and has been published in dozens of periodicals, including the New York Times, the Washington Post, Rolling Stone, George, Essence, and One World.

"Kevin Powell is pushing to bring, as he has so brilliantly done before, the voices of his generation: the concerns, the cares, the fears, and the fearlessness. Step into a World is a kaleidoscope into the world not bound by artificial constructs like nation. John Coltrane recorded ‘Giant Steps,’ which is a riff on the sight and sounds in his muse. Powell plays the computer with equal astuteness." –Nikki Giovanni

"Those of us who pay attention were aware that the younger generation of blackwriters was being smothered by the anointment of talented tenth Divas and Divuses, and their commercial accommodationist ‘Fourth Renaissance. ’This anthology is indeed a breakthrough! It combines the boldness and daring of hip-hop with the intellectual keenness of a Michele Wallace or a Clyde Taylor." –Ishmael Reed

"In a culture where videos, the Internet, and other high-tech communication is being consumed like the latest mind-altering drug, how does great literature grow and survive? These writers will answer that all-important question. This anthology provides a clue, a hint, as to where we might be going. They are resisting all this vacant, empty-minded nothingness. Read them. Listen to them. If you don’t, you do so at your peril." –Quincy Troupe

More books like Step into a World: A Global Anthology of the New Black Literature may be found by selecting the categories below:

Tell us what do you think about Step into a World: A Global Anthology of the New Black Literature.