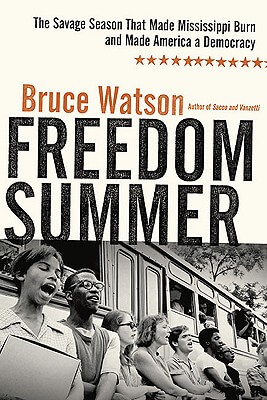 Freedom Summer: The Savage Season That Made Mississippi Burn And Made America A Democracy
by Bruce Watson

Read Our Review of Freedom Summer: The Savage Season That Made Mississippi Burn And Made America A Democracy

Book Description:
A majestic history of the summer of ’64, which forever changed race relations in America

In the summer of 1964, with the civil rights movement stalled, seven hundred college students descended on Mississippi to register black voters, teach in Freedom Schools, and live in sharecroppers’ shacks. But by the time their first night in the state had ended, three volunteers were dead, black churches had burned, and America had a new definition of freedom.

This remarkable chapter in American history, the basis for the controversial film Mississippi Burning, is now the subject of Bruce Watson’s thoughtful and riveting historical narrative. Using in- depth interviews with participants and residents, Watson brilliantly captures the tottering legacy of Jim Crow in Mississippi and the chaos that brought such national figures as Martin Luther King Jr. and Pete Seeger to the state. Freedom Summer presents finely rendered portraits of the courageous black citizens-and Northern volunteers-who refused to be intimidated in their struggle for justice, and the white Mississippians who would kill to protect a dying way of life. Few books have provided such an intimate look at race relations during the deadliest days of the Civil Rights movement, and Freedom Summer will appeal to readers of Taylor Branch and Doug Blackmon.

More books like Freedom Summer: The Savage Season That Made Mississippi Burn And Made America A Democracy may be found by selecting the categories below:

Tell us what do you think about Freedom Summer: The Savage Season That Made Mississippi Burn And Made America A Democracy.