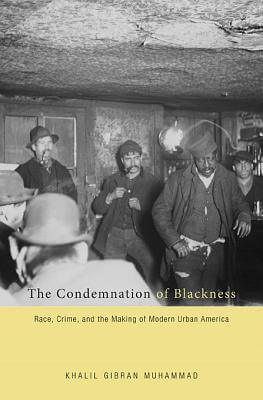 The Condemnation of Blackness: Race, Crime, and the Making of Modern Urban America
by Khalil G. Muhammad

At the turn of the 20th century, reformers and social scientists argued that high rates of crime and violence among white European immigrants could be explained by poverty, discrimination and social upheaval. Improve social conditions, they said, and immigrants would be like the native-born. But the same argument didn't apply when it came to African Americans. Liberals and conservatives alike accepted that high crime rates for blacks were evidence of racial inferiority.

In his new book The Condemnation of Blackness: Race, Crime, and the Making of Urban America, Khalil Gibran Muhammad, an assistant professor of history at Indiana University, tells "an unsettling coming-of-age story" about the idea of black criminality in modern America.

The conflation of crime and race takes hold in the post-Reconstruction period, he writes, when "Southerners used crime to justify disfranchisement, lynching and Jim Crow segregation; Northerners used it to justify municipal neglect, joblessness, and residential segregation."

The Condemnation of Blackness, published by Harvard University Press, shows how social scientists refashioned blackness through newly available crime data. In the words of historian David Levering Lewis, the book "disrupts one of the nation's most insidious, convenient and resilient explanatory loops: whites commit crimes, but black males are criminals."

At the heart of the initial story is the 1890 census, the first to describe the generation of African Americans born after the Civil War. Among its findings: blacks made up 30 percent of U.S. prisoners but only 12 percent of the overall population. Coming at a time of "race fatigue," with slavery abolished and the 14th and 15th Amendments to the Constitution supposedly having extended civil rights to blacks, the data were presented as proof that America's "Negro Problem" was intractable. The age of Jim Crow segregation was just beginning.

"Even Northern liberals saw it as a reflection not of racism but of black people's bad behavior. They believed that African Americans hadn't developed 'internal controls' or recognized that freedom comes with responsibility," Muhammad said. "This is striking because, it's at the exact moment when the opposite argument was being made for European immigrants -- that they need to be helped, to be Americanized, and it needs to happen now." Northern social workers set about to save the "great army of unfortunates," but left blacks alone to "work out their own salvation."

The linking of race and crime rested heavily on the work of certain influential scholars. Harvard professor Nathaniel Shaler wrote that blacks "are a danger to America greater and more insuperable than any of those that menace the other great civilized states of the world." Statistician Frederick Hoffman's Race Traits and Tendencies of the American Negro, published in 1896, "combined crime statistics with a well-crafted white supremacist narrative to shape the reading of black criminality while trying to minimize the appearance of doing so," Muhammad writes.

At the same time, African Americans such as the social scientist W.E.B. Du Bois and the reformer Ida B. Wells documented racism and discrimination but remained outside the mainstream.

The story changes as the decades pass. The Great Migration, starting around 1910, brought a half million blacks from the South to the cities of the Northeast and Midwest. Race riots struck more than 20 cities, sometimes with police aiding white mobs who attacked blacks. Evidence accumulated that, in the North as in the South, American justice wasn't colorblind -- and a new generation of black and white social scientists concluded that crime statistics were not a reliable measure of criminal activity because racism was unaccounted for.

The book ends on the eve of World War II, but the story goes on. Muhammad points out that "the link between race and crime is as enduring and influential in the 21st century as it has been in the past," with blacks accounting for nearly half of the more than two million Americans now behind bars. He argues that numbers don't "speak for themselves," however, and that the flaws in how race and crime data were used in the past should make us cautious about how we use them today.

"The invisible layers of racial ideology packed into the statistics, sociological theories, and the everyday stories we continue to tell about crime in modern urban America are a legacy of the past," he writes. "The choice about which narratives we attach to the data in the future, however, is ours to make."

More books like The Condemnation of Blackness: Race, Crime, and the Making of Modern Urban America may be found by selecting the categories below: