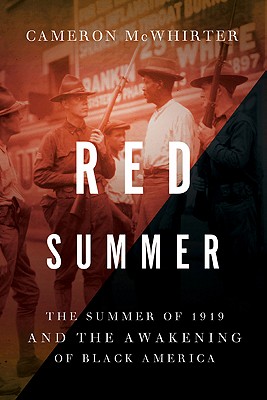 Red Summer: The Summer of 1919 and the Awakening of Black America
by Cameron McWhirter

After World War I, black Americans fervently hoped for a new epoch of peace, prosperity, and equality. Black soldiers believed their participation in the fight to make the world safe for democracy finally earned them rights they had been promised since the close of the Civil War.

Instead, an unprecedented wave of anti-black riots and lynchings swept the country for eight months. From April to November of 1919, the racial unrest rolled across the South into the North and the Midwest, even to the nation’s capital. Millions of lives were disrupted, and hundreds of lives were lost. Blacks responded by fighting back with an intensity and determination never seen before.

"Red Summer" is the first narrative history written about this epic encounter. Focusing on the worst riots and lynchings — including those in Chicago, Washington, D.C., Charleston, Omaha and Knoxville — Cameron McWhirter chronicles the mayhem, while also exploring the first stirrings of a civil rights movement that would transform American society forty years later.

"Masterly examination of the widespread outbreak of racially motivated mob violence in the summer of 1919. In his debut, "Wall Street Journal" staff reporter McWhirter describes in gripping detail a wave of incidents of mob violence that erupted across America in the summer following the end of World War I. ... Throughout the book, the author writes with professional detachment, permitting his subjects’ words and deeds to speak eloquently for themselves, amplified by liberal quotation from the vibrant black press of the period. An unsettling reminder of the cruelty and hatred that can lie beneath the surface of a nation formally committed to equal justice for all, but also a monument to the suffering and perseverance of a people at last determined to demand rights promised but too long denied." — "Kirkus Reviews"

More books like Red Summer: The Summer of 1919 and the Awakening of Black America may be found by selecting the categories below: