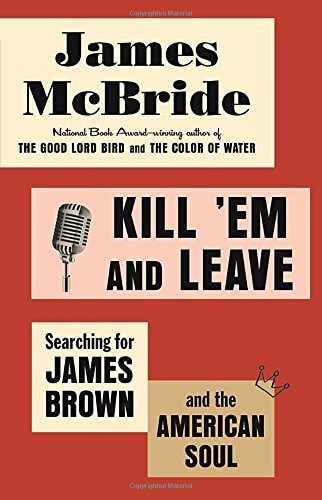 Kill ’Em and Leave: Searching for James Brown and the American Soul
by James McBride

National Book Award winner James McBride goes in search of the “real” James Brown after receiving a tip that promises to uncover the man behind the myth. His surprising journey illuminates not only our understanding of this immensely troubled, misunderstood, and complicated soul genius but the ways in which our cultural heritage has been shaped by Brown’s legacy.

Kill ’Em and Leave is more than a book about James Brown. Brown’s rough-and-tumble life, through McBride’s lens, is an unsettling metaphor for American life: the tension between North and South, black and white, rich and poor. McBride’s travels take him to forgotten corners of Brown’s never-before-revealed history: the country town where Brown’s family and thousands of others were displaced by America’s largest nuclear power bomb-making facility; a South Carolina field where a long-forgotten cousin recounts, in the dead of night, a fuller history of Brown’s sharecropping childhood, which until now has been a mystery. McBride seeks out the American expatriate in England who co-created the James Brown sound, visits the trusted right-hand manager who worked with Brown for forty-one years, and interviews Brown’s most influential nonmusical creation, his “adopted son,” the Reverend Al Sharpton. He describes the stirring visit of Michael Jackson to the Augusta, Georgia, funeral home where the King of Pop sat up all night with the body of his musical godfather, spends hours talking with Brown’s first wife, and lays bare the Dickensian legal contest over James Brown’s estate, a fight that has consumed careers; prevented any money from reaching the poor schoolchildren in Georgia and South Carolina, as instructed in his will; cost Brown’s estate millions in legal fees; and left James Brown’s body to lie for more than eight years in a gilded coffin in his daughter’s yard in South Carolina.

James McBride is one of the most distinctive and electric literary voices in America today, and part of the pleasure of his narrative is being in his presence, coming to understand Brown through McBride’s own insights as a black musician with Southern roots. em>Kill ’Em and Leave is a song unearthing and celebrating James Brown’s great legacy: the cultural landscape of America today.

Here are some further examples of Brown’s isolation, as McBride describes them: Late in life James Brown directed his children (the ones he acknowledged) to make appointments when they ­wanted to see him. When he was finished with a gig, he would routinely have his hair done for two or three hours, before seeing anyone backstage, and then he would often leave, rather than undertake the glad-handing typically associated with the entertainment profession. He left Zaire, after performing on the occasion of the Ali-­Foreman “Rumble in the Jungle” prizefight, rather than receive a bag of diamonds offered by the despot in charge of that nation. And so on. This book’s title itself refers to Brown’s avowed philosophy in regard to interacting with fans.

It is McBride’s heavy burden to know this about Brown — his evasiveness, his secrecy — and to fashion a credible story that leads us from Page 1 to Page 232 according to what they call, in writing workshops, a “narrative arc.” The narrative arc is not a thing wanting in McBride’s best-known works. “The Good Lord Bird,” for example, has not only John Brown the abolitionist to drive it along, but a surprising case of gender imposture at its heart as well. And where “The Color of Water” deals with isolation in many of the ways that “Kill ’Em and Leave” does, it is essentially a bildungsroman, a tale of the derivation of its narrator. This is an especially effective idea of “narrative arc.”—Rick Moody, The New York Times Book Review

More books like Kill ’Em and Leave: Searching for James Brown and the American Soul may be found by selecting the categories below:

Tell us what do you think about Kill ’Em and Leave: Searching for James Brown and the American Soul.