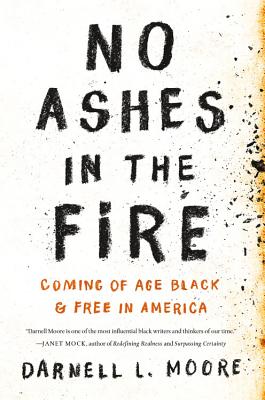 No Ashes in the Fire: Coming of Age Black and Free in America
by Darnell L. Moore

Book Description:
From a leading journalist and activist comes a brave, beautifully wrought memoir.
When Darnell Moore was fourteen years old, three boys from his neighborhood tried to set him on fire. They cornered him while he was walking home from school, harassed him because they assumed he was gay, and poured a jug of gasoline on him. He escaped, but just barely. It wasn’t the last time he would face death.

Three decades later, Moore is an award-winning writer and activist, a leader in the Movement for Black Lives, and a tireless advocate for justice and liberation. In No Ashes in the Fire, he sets out to understand how that scared, bullied teenager not only survived, but found his calling. Moore traces his life from his childhood in Camden, New Jersey, a city scarred by uprisings and repression; to his search for intimacy in the gay neighborhoods of Philadelphia; and, finally, to the movements in Newark, Brooklyn, and Ferguson where he could fight for those who, like him, survive on society’s edges.

No Ashes in the Fire is a story of beauty and hope - and an honest reckoning with family, with place, and with what it means to be free.

More books like No Ashes in the Fire: Coming of Age Black and Free in America may be found by selecting the categories below:

Tell us what do you think about No Ashes in the Fire: Coming of Age Black and Free in America.