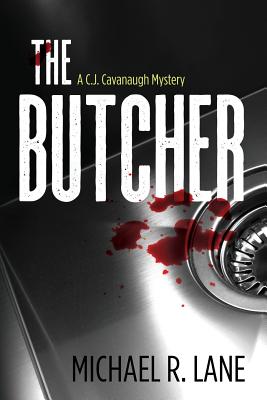 The Butcher
by Michael R. Lane

C. J. Cavanaugh is working a routine Lunsford Insurance undercover investigation accompanied by his Homicide Detective girlfriend Destini Pendleton. At the same time, Kylie Preston is out for a night of fun with The Liberated Wives Club, a group of close friends who have not only survived divorce but also thrived in its wake. C. J. sees enough during his spy mission to render a decision on the claimant and is ready to call it a night. He and Destini decide to conclude their veiled date with a nightcap at his place. Kylie Preston encounters an alluring stranger who charms her into going home with him. As fate would have it, Kylie and the stranger drive past C. J. and Destini en route to their separate destinations, neither couple aware of the other.

The next day, Kylie Preston’s body is discovered in a stolen car, dissected and preserved in ice chests, the parts wrapped in brown butcher’s paper secured with cellophane tape and twine. When Portland Homicide finds themselves at a dead end, Carl Wheaton, a dear friend and colleague of the deceased Vice-President of Acquisitions for Lunsford Insurance, implores C. J. Cavanaugh to investigate on behalf of his employer. Despite his misgivings about becoming involved in another murder case, C. J. cannot say no to his friend.

Not everyone at PPD Homicide is happy to have C. J. snooping around on their case. Hotshot rookie Homicide Detective Laurie McCaskill is half of the team assigned to the Preston murder. Detective McCaskill is determined to have C. J. booted off "her case" despite repeated assurances from her veteran partner and the Police Captain that having C. J. on board is a good thing.

As C. J. delves into the background of the murder victim in search of motives, he is disturbed by what he uncovers. Kylie Preston chaired a culture of unethical insurance practices that constructed many of the rungs on her ladder to success. Were Carl Wheaton and Lunsford Insurance aware of Kylie’s unethical practice of short-changing insurance claimants? If so, were they complicit in any way, or did they simply choose to look the other way? The answers could irreparably damage the hospitable relationship the Cavanaugh Investigation Agency had with their number one client. When C. J. also learns that Kylie Preston’s greed and deceit were not restricted to ripping off policyholders but extended to the Lunsford family themselves, then all bets are off. Add to that the discovery that Carl Wheaton and Kylie Preston were lovers, and the shallow suspect pool deepens.

During the course of Cavanaugh’s murder investigation, more victims turn up mutilated in precisely the same manner as Kylie Preston. The press dubs the deranged killer "The Butcher." C. J. places his ethical and personal concerns regarding Carl Wheaton and Lunsford Insurance on the back burner in order to maintain his focus on apprehending a serial murderer. Each grisly discovery intensifies the race to capture The Butcher before he strikes again.

More books like The Butcher may be found by selecting the categories below: