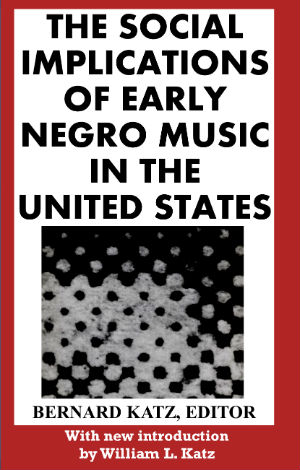 The Social Implications of Early Negro Music in the United States
by William L. Katz

Book Description:
With New Introduction by William L. Katz
Bernard Katz’s rare collection of 19th and early 20th century articles show how beyond the haunting melodies and Biblical phrases of early African American music lay a message of defiance and resistance. Under the eyes of masters and overseers enslaved people sought to communicate with one another, protect community, offer hope and strength for families while misleading the enemy. Many songs carried covert calls for freedom, and the Underground Railroad used some as signals. Early eyewitness reports by ministers, laymen and foreign visitors from inside the cotton kingdom capture an American history long ignored or suppressed. Slavery’s apologists insisted these songs signified a happy plantation for masters and slaves. Frederick Douglass heard them differently. “Slaves sing most when they are unhappy. I have never heard any songs like those anywhere since I left slavery, except in Ireland . . . it was during the famine of 1845-1846.” Essays include: “Of the Sorrow Songs” by W.E.B. Dubois on this music’s role in his life; “Negro Spirituals” by Thomas Wentworth Higginson, the white commander of a famous Black Civil War regiment; “The Social implications of the Negro Spiritual” by John Lovell, an African American scholar who in 1939 first uncovered a music of resistance. Here also are more than 150 of the songs, many with their original music. Bernard Katz, his son historian William Loren Katz explains in a new Preface, was first captivated by Black blues and jazz. He organized Town Hall jazz and blues concerts and was a founding member of the Committee for the Negro in the Arts.

Tell us what do you think about The Social Implications of Early Negro Music in the United States.