Book Review: White Guilt: How Blacks and Whites Together Destroyed the Promise of the Civil Rights Era 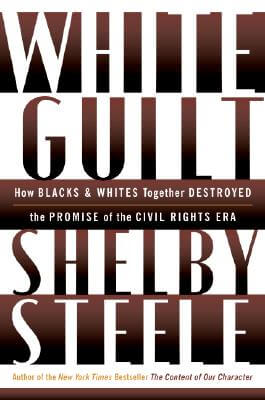 Read a Description of White Guilt: How Blacks and Whites Together Destroyed the Promise of the Civil Rights Era

’Clearly a mission of the current Bush presidency has been to destigmatize contemporary conservatism. Bush has accepted that he operates in the age of white guilt, and he has brought dissociation to conservatism. He appoints minorities at every opportunity and to the highest levels of government. His faith-based initiative directly addresses poverty through the institution of the black church’

Bush is the first conservative president to openly compete with the left in the arena of ideas around poverty, education, and race. He has attempted to establish conservatism as a philosophy of social reform. But in our deepening culture war, Bush has endured a remarkable degree of contempt from many of his opponents, more contempt than even the worst Bush caricatures would justify.

I departed from the left because I simply couldn't take the schizophrenia required to stay in the cultural and political world that I had belonged to. I escaped schizophrenia, but I walked right into stigmatization as an Uncle Tom. If I've learned anything from all of this, it is that if you want to be free, you have to make yourself that way and pay whatever price the world extracts. So I am quite free now.’
’Excerpted from Chapter 26, ’A Culture War’

With the President approval-rating at historic lows, he should consider himself very lucky indeed to have as loyal a man in his corner as Shelby Steele. At a time when so many other neo-cons have finally come around to questioning the wisdom of the administration's agenda in Iraq and New Orleans, Steele is still championing Bush as blacks' best friend in the White House since LBJ.

By contrast, he claims that Clinton has undeservedly been dubbed as ’America's first black president’ because of ’his litany of bad habits from infidelity to chronic lateness.’ Currently a research fellow at Stanford University's Hoover Institute, Steele, unfortunately, devotes so much ink here to rehashing Clinton's moral failings, especially the Monica Lewinsky affair, that the reader frequently forgets the author's central theme.

The prevailing theory of White Guilt: How Blacks & Whites Together Destroyed the Promise of the Civil Rights Era is that the social fabric of this country started to fall apart in the Sixties when whites decided to make amends for slavery and the subsequent discrimination against blacks. The problem arose when blacks then proceeded to parlay that guilt by adopting a permanent victim status which absolved them from taking responsibility for their plight.

For instance, Shelby argues that ’A 70 percent illegitimacy rate among all blacks pretty much makes the case that there is a responsibility problem. To know this, as all blacks do and to have to pretend that it is not strictly true or that certain systemic forces are more responsible than blacks themselves is knowingly to lie to oneself.’

Conveniently ignoring the Administration's mishandling of Hurricane Katrina, this very spirited, anti-African-American screed repeatedly blames the victims for their lot in life at every turn, and in a sadistic fashion, almost as if he savors the smug cruelty suggested by his insensitivity. He tempers his caustic commentary with constant reminders that he, too, is black, invariably juxtaposing each criticism with an autobiographical aside in which he makes flip comments concluding that if he could avoid this or that pitfall and pull himself up by his bootstraps, anybody else can.

Euphoric in his having achieved the American Dream which has proven to be so elusive for most blacks, Steele repeatedly proclaims himself to be cured of the schizophrenia he says has a destructive hold on most other African-American intellectuals. ’Tired of living a lie’ in order to be black, he has found bliss in a Negro Nirvana free of the ’corrupting falseness' of the pressure to identify with folks who look like him and with prevailing black points-of-view.

Since Shelby Steele has apparently found not only a psychic, but a physically comfy, suburban refuge from the rigors of what he terms ’race fatigue,’ perhaps this arrogant Republican apologist ought to consider refraining from delivering condescending lectures to those unfortunates still stuck in the ’hood who have to deal with the host of woes visited on the ghetto on a daily basis, especially since he apparently no longer considers himself a hyphenated-minority.

Read HarperCollins’s description of White Guilt: How Blacks and Whites Together Destroyed the Promise of the Civil Rights Era.