Book Review: A People’s History Of The United States 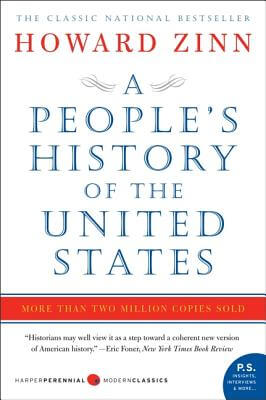 "There is not a country in world history in which racism has been more important, for so long a time, as the United States. Slavery was immensely profitable to some masters. [Future President] James Madison told a visitor shortly after the American Revolution that he could make $257 on every Negro in a year, and spend only $12 or $13 on his keep.

The slaves were taught discipline, were impressed again and again with the idea of their own inferiority to know their place, to see blackness as a sign of subordination, to be awed by the power of the master. To accomplish this there was the discipline of hard labor, the breakup of the slave family, and the power of law and the overseer to invoke whipping, burning, mutilation and death.

And the problem of the the color line, as WEB DuBois put it, is still with us. So, it is more than a purely historical question to ask: How does it start? Or, to put it differently: Is it possible for whites and blacks to live together without hatred?"
’Excerpt from Chapter Two

On August 28th, Governor Jim McGrevey signed a groundbreaking bill into law which made the teaching of black studies mandatory as part of the core curriculum in the New Jersey public schools. The legislation established an Amistad Commission whose stated purpose is to promote an awareness of the history of slavery in the United States, including its residual effects.

More recently, McGrevey took part in a panel discussion at a symposium on the subject at Princeton University where participants discussed how the state ought to go about revising its textbooks. If the board members are actually committed to disseminating the truth about the hardships encountered by African-Americans in this country, then it ought to consider making A People's History of the United States required reading.

Covering the period from 1492 practically to the present, this illuminating opus overturns many conventional notions, not just about America's treatment of blacks, but about Native Americans, women, and other disenfranchised groups whose perspectives have traditionally been left out of the education equation. For instance, in discussing the abolitionist movement, slave revolt leaders like Nat Turner and John Brown are re-cast, here, as heroes and martyrs for a worthy cause.

In the past, these freedom fighters have been dismissed as deserving of their fate, even though they were, in fact, All-American heroes as much as Patrick Henry and Nathan Hale. After perusing the chapter entitled, Slavery without Submission, Emancipation without Freedom, you might come away with a new idea about whether Lincoln deserves any credit for the demise of that demonic institution.

Credit for this timely, called-for creation goes to Howard Zinn, Professor Emeritus of Political Science at Boston University. Zinn, a firebrand perhaps best-known for his work as a social activist, has long been associated with progressive politics. But the visionary historian has also written more than fifteen, highly-regarded texts over the course of his illustrious career.

Now that New Jersey, and the rest of the country for that matter, stands poised to adopt a more embracing version of our cultural legacy, I expect many a school board to approve A People's History of the United States for its student body. And, if so, the next generation of Americans will be a lot better off with an Abraham Lincoln with some well-deserved warts uglier than the one on his chin.

Read Harper Perennial’s description of A People’s History Of The United States.