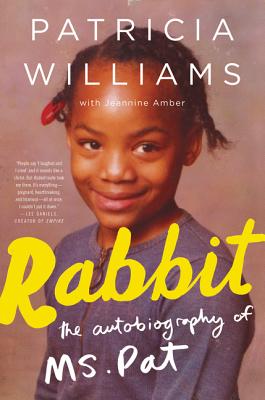 Read a Description of Rabbit: The Autobiography of Ms. Pat

I don’t often write about comedians, but the recent passing of my friend Dick Gregory reminded me of the very important role that comedians play in our lives. Not that Gregory was simply a comedian. He was so much more than that – a civil rights activist, leader, amazing speaker, holistic health practitioner, and so much more. It was in thinking of him that I picked up the book, Rabbit: The Autobiography of Ms. Pat a hot, relatively new comedian who uses her dysfunctional early life as fodder for her comedy.

Ms. Pat, also known as Patricia Williams says that her daughter frequently threatens to put her in an old folk home, but she says that’s because her daughter is only 13 years younger than she is, they will be in the old folks home together. Funny? Maybe. Tragic? For sure. After all, Ms. Williams had her first child by a married man 8 years her senior when she was 13 years old. By 15, she had two children, a daughter and son, by the married man who was a habitual cheat.

While her story is not typical, it is also not unusual. It would be the foundation for some sociologist’s (consider the late Senator Daniel Patrick Moynihan) tale of pathology in the African American community. Ms. Pat’s story bears retelling, not because of its pathology, but because she has been able to find the humor in it. Her book tells her story so effectively that you don’t know whether to laugh, cry, scream, or shake her. It’s a redemptive story of a woman who, by 20, had been to jail for drug-dealing (but not for using), had held jobs as a waitress, factory worker, gas station worker, and then moved up to a house near a pond in an Indianapolis suburb, earning her living as a comedian. (They don’t check your background for doing standup, she says).

While I haven’t had a chance to catch Ms. Pat’s comedy act, my half-hour conversation with her makes me certain that it’s a hoot, just like her book. She tells her story, and she tells it raw, with expletives undeleted. Her first twelve years of life will break your heart. She spent her earliest years growing up in her grandfather’s “liquor house”, but when her grandfather was incarcerated for killing a woman, she began living a near-nomadic life with her mother and her siblings. Moving every few months, her belongings in garbage bags, she endured hunger at home, ridicule at school, and but for a couple of dedicated and giving teachers, a rather lonely life

She got into selling drugs because her baby’s daddy sold them and got busted. At 15, she felt she had no other way to support her two children. For a time she lived large, but says she “grew up some” when she went to jail, and had time to think about the direction of her life. Jail didn’t stop her from dealing – she kept it up until well after she met her current husband. While she was committed to stop selling drugs, she couldn’t find work, until one of her social workers remarked that she’d make a great comedian. Why? Because things that other people find tragic are funny to me. “When my sister-in-law died in the middle of an Atlanta Falcons game, I burst into tears,” she tells me. “I don’t know if I was crying because she died or because she never got to see the Falcons finish losing that game.”

Ms. Pat says she stays out of politics and “tries to stay neutral.” Still, she manages to make a few pithy, funny political comments. She likens Confederate flag wavers to Cleveland Browns fans. “They are used to losing. They are serious about their losing team.” She won’t say much about the current occupant of the White House (“look, I want to sell books”), but she does note that he has caused “regular black folks to start reading the paper. I never used to read the New York Times, but I have to keep up with him.” And, she notes that her family Christmas cruise was cancelled, thanks to the 2016 election, “I was not getting on a boat with that fool in office.”

Ms. Pat avoids political talk, but her story can have an impact on public policy. How do young mothers support their kids if they are too young for a work permit? How can ex-offenders support themselves if they can’t find work because of their criminal record? Why are there so many resources now available for opiate addicts, when so few were available for those who were addicted to crack cocaine?

When Ms. Pat was a kid, she said “nobody told me they loved me, so now I love everybody”. The woman has a heart of gold, having raised her sister’s kids for more than 10 years, and now, with her own children (she has two sets – her 31 and 30 year old “Medicaid kids” and the 17 and 19 year old children with her current husband, her “Blue Cross kids’) headed to college, she is raising the four young children of a niece who has “disappeared”. While the situation may be tragic for the children and for the niece, it is fodder for more comedy for Ms. Pat. Some have called her “the black Roseanne” since she has an upcoming sitcom (produced by Lee Daniels). I say just call her funny, poignant, and blunt Ms. Pat. She, like Dick Gregory, uses comedy to blunt the outrage of tragedy.