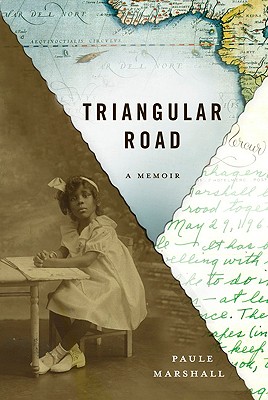 Read a Description of Triangular Road: A Memoir

I don't know how I came to be aware of Paule Marshall's new book, Triangular Road: a Memoir. Maybe it was the same still small voice of gospel lore that lead me to discover the music and voice of Aretha Franklin, which saved my life when I was 13 years old. I am going to give the credit to that still small voice for doing me another solid because I would not have read Triangular Road otherwise. I am acquainted with the author only by name and the place she holds in the African American literature. I have not read any of Marshall’s books or short stories, which made my choosing to read Triangular Road an odd choice to say the least. The small still voice knew more than I did for Triangular Road was the perfect introduction to Marshall and her writing. Triangular Road is a slim exceptional work of literature, a bright radiant gem that even midnight could not rob it of its brilliance. Triangular Road is based on a lecture series in which Marshall discusses the relevance of three bodies of waters: Rivers, Seas and Oceans, and what they mean to her personally and historically, socially to African Americans.

I love Triangular Road! The writing has the feel of lectures being given by a favorite professor who happens to be an excellent storyteller. From the beginning, I was transported to the cool lazy summer day under a big shade tree, with an endless supply of ice cold lemonade and Marshall telling me a few stories of her life. Boy, does Marshall know how to tell a story.

From the start I knew Marshall and I were going to get along famously because the book began with Marshall's fond recollection of Langston Hughes in Homage to Mr. Hughes. I adore Langston Hughes. My love for him does not stem from Hughes poems. I am a complete, over-the-top sucker for his stories, his novel, his two biographies and his creation of Jesse B. Semple. For a brief second I wondered why Marshall included Langton Hughes in this collection. Could it have been that Marshall held Hughes in such high esteem or that Hughes was responsible for her first oversea trip as an author? I also tentatively thought the connection was due to Hughes's famous poem, The Negro Speaks of Rivers. Homage to Mr. Hughes was an excellent welcome mat to the rest of the lectures. I knew I was in good hands. I laid back and left the driving to Marshall. What a fantastic trip.

I've Known “Rivers: The James River” is a marvelous story in which Marshall reflects on the beauty and characteristics of The James River today and the part it played, historically, in the origin of African Americans presence in the young, not yet named United States of America. Marshall has two separate streams of thoughts unfolding in parallel with the James River being the common denominator. I was not confused or lost when Marshall switched from one subject to the other. I also noticed Marshall's sentence structure. Some or her sentences are beautifully crafted. I was in heaven. It had been a long time since I was able to savor the form of a strikingly constructed sentence. I missed it.

“I’ve Known Seas: The Caribbean Seas,” Marshall relates her parents stories and her childhood, as well as the island's role in America's slave trade. This section is the largest lecture in the book and consists of three parts. The last lecture is I've “Known Oceans: The Atlantic;” Marshall travels to Africa for an arts festival and explores the role Africa played in the slave trade and being able to forgive. The section was the most poignant. I have a hard time forgiving Africa. I do not know how I came about my hard attitude. I have a feeling the anger is ancestral. By the time I completed the lecture, some of the heat I held against Africa dissipated. I have not completely abandon the anger but I saw the point Marshall made and I concede.

Triangular Road is a radiant gem of a book. Infused with wonderful stories, beautifully told, and thought provoking; Triangular Road served as the perfect welcome of an incredible writer for anyone who had not read Paule Marshall before.