Book Review: Riot and Remembrance: The Tulsa Race War and Its Legacy 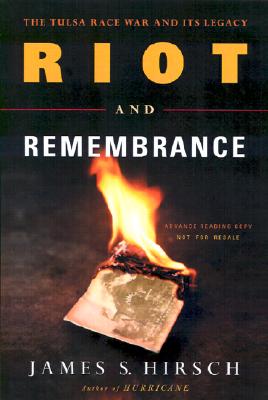 Read a Description of Riot and Remembrance: The Tulsa Race War and Its Legacy

Although some say that times and attitudes are changing, I'm rather skeptical. Only now am I aware of events, individuals that I should have been introduced to during my formative years, including the existence of race riots of the late 1890s and early 1900's. The race war of Tulsa, Oklahoma, that destroyed the black area known as Greenwood, "The Black Wall Street", is freshly examined in James Hirsch's Riot and Remembrance: The Tulsa Race War and Its Legacy.

I was ignorant of the race war of Tulsa, OK, or Greenwood, until the late 1980s when talks of reparations for the survivors of the Rosewood, Florida riot hit the media. A few years later, I read Jewel Parker Rhodes's excellent novel, Magic City, a fictional retelling of the race war of Tulsa. Upon completion of Magic City, I vowed to read more about the Tulsa race war, and reading Riot and Remembrance was a perfect way to satisfy that vow. Riot and Remembrance filled in a couple of blanks concerning Tulsa, the events of the riots, and the general social atmosphere of hate and distrust that led to the fatal eruption of May 31, 1921.

Riot and Remembrance begins with the origin of the state of Oklahoma and the city of Tulsa; how Tulsa became the Oil Capitol of The World; the belief that it was the "Promised Land" for ex-slaves and people of color; and presents the attitudes of the white settlers, many of them former Southerners, who dragged their feelings of racial hatred and racial superiority along with them. Hirsch describes the taut, uneasy surroundings of racial hostility and the spark that ignited a race war, and resulted in the killing of men, women and children. The actual number of causalities has always been in dispute. The once blossoming African-American community of Greenwood -- an oasis to many African-Americans -- was utterly and completely annihilated.

The book also examines the city of Tulsa throughout the 20th century, and reviews the national exposure that damaged its public image, the public and political battle over reparations for the survivors, and white Tulsa finally accepting, (or in many cases not accepting), any responsibility for the tragic and deadly confrontation of 1921.

On the whole, the book had several shortcomings that left a bittersweet scent that I couldn't shake or logic away.  While Riot and Remembrance delved into elements I found enlightening there were features of the riot that the author did not expand on at all. Mainly, what happened with the black man and the white woman that caused the spark that resulted with the destruction of Greenwood? What treatment did they receive from their respective communities before, during and after the confrontation? This incident, which set off the race war, was reduced to a mere footnote. I found this rather strange and could not fathom why Hirsch did not offer more explanation. I received a more complete explanation from the appendix of Jewel Parker Rhodes's novel Magic City than I did from this non-fictional account.

Also, in my opinion the elevator incident was and remained the biggest mystery of the entire race war. Without a thorough investigation of what took place in the elevator, and its aftermath, the book had a small hole in it, large enough to irritate me. You all know that old saying, Curiosity killed the cat, but satisfaction brought him back". I guess if I were a cat I'd still be dead.

I found the author's review of the cause of what triggered the physical confrontation and who shouldered the responsibility to be unacceptable. I oppose Hirsch's assessment that blacks should have realized what their actions (going to the jail, armed, to see the accused black man in order to prevent him from being lynched) would have meant to white Tulsans, that it would cause the white community to feel threatened and primed for violence. If the white Tulsans were not racists, and animalistic in the FIRST place, the residents of Greenwood would not have felt the need to make the stand, would not have believed that the black man was going to be lynched or come to any bodily harm. My mother has a saying, "A drunk tells a sober thought", and those white Tulsans were drunk with hate and violence. The very idea that these black men who approached the courthouse armed, should be held partially to blame, frankly, pissed me off!

Nor did I take kindly to Hirsch's coverage of the event. For example, before and after the race war, sizable excerpts were included in Riot and Remembrance from the white newspapers and editorials of the time. Fine, I have no problem with it. My problem lies in the fact that the black newspapers' responses and editorials were not included to provide balance and perspective.  Hirsch states that Walter White, former head of the NAACP, was in Tulsa at the time of the race war and later wrote an article about it. Hirsch merely mentions White's article in a couple of paragraphs, just enough to pique a person's interest.  But where White's article gets only a brief blip, there are entire pages where the thoughts and feelings of white racist editor of The Tulsa Tribune newspaper; Richard Lloyd Jones, are displayed all over the place. These incidents of one-sided reportage happen over and over again and lead me to judge that not only does the book have an unbalanced perspective, it has no sense of objectivity.

While Riot and Remembrance contains some highlights and points of note, I was left with an angry aftertaste. History books, or historical accounts, in my opinion, should be thorough as humanly possible, and above all, objective. Putting a politically correct spin, or shifting some of the responsibility of the race war to the black residents of Greenwood, shaded the truth and let history have a few nips and tucks which is just as destructive as pretending that the Tulsa race war had never taken place at all.

Read Houghton Mifflin Harcourt’s description of Riot and Remembrance: The Tulsa Race War and Its Legacy.