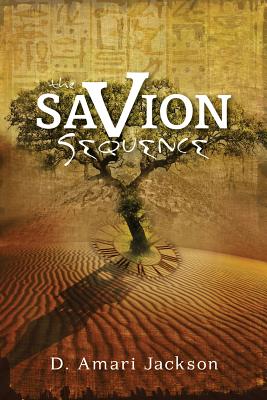 Read a Description of The Savion Sequence

My interest was recently piqued by a trailer which appeared on the AALBC.com discussion boards.  The Trailer plugged a novel dealing with metaphysics, a subject which intrigues me.  Because the succinct synopsis that accompanied the promo showed promise of this work being well-written, I decided I wanted to check out "The Savion Sequence" by D. Amari Jackson.

Last year I posted a review of "The Lost Symbol" by Dan Brown, and upon completing "The Savion Sequence," I found myself suspended in the realm of de ja vu as once again I had completed a book that delves into the esoteric and deals with the interpretation of cryptic paradoxes. What was different this time is that "The Savion Sequence" involves the mysteries of the Sahara desert and the meandering of the Nile river, and is told from the Afro-centric perspective, a slant that advances a revisionist version of who the ancient Egyptians really were. Who, indeed. Certainly not the Arabs just recently seen rioting in the streets of Cairo since, according to D. Amari Jackson, proof exists that these Semites usurped the Kemets, - the true Egyptians who were actually black by virtue of the fact that Egypt is in Africa.

Brigham Elijah is the main character of The Savion Sequence, and he is a college professor of black history. Influenced by the philosophy of the archeologist who was his favorite uncle, Brigham has strode through life closely observing his environment, gleaning what can be determined from seeing things through a different set of eyes. Ironically, he has not been as diligent when it comes to interacting with people, choosing to keep his emotions subdued, his relationships casual, inhibited perhaps by his intellectual parents who, as role models, were dutiful but detached. Only when he meets and beds Samora, a brilliant, sexy, colleague who is portrayed as womanhood personified, - a status the author attributes to her being of pure African descent, - does the personal life of our hero acquire a third dimension that "rocks his world"!

As for the formulaic plot of The Savion Sequence, it centers around the murder of Brigham's beloved uncle, Savion Elijah, a brutal slaying which Brigham suspects was perpetrated by surreptitious forces out to get their hands on important secrets that Savion presumably had in his possession. Hoping to avenge his martyred uncle, Brigham searches for any clues Savion may have left behind, possibly aware that his life was in danger. Summoning all of the metaphysical disciplines his uncle instilled in him, Brigham concentrates on honing his intuitive powers and in the course of trying to make sense of the highlighted passages he has discovered in a Bible belonging to his late uncle, he is grateful to discover that help is at hand in the person of a teen-aged orphan whom his uncle had befriended. Transplanted in America where he ends up in foster care, Moja is a native of the African country, Mali. As a member of the Dogon race, a tribe of people with a genius for mathematics and astronomy, Moja gets his mojo working and easily calculates the mathematical sequences that the ear-marked Bible clues represent. With this input, Brigham is able to transform numerical equations into the symbolic diagrams that illustrate the "as above, so below" principle and inspired to seek more answers, he decides to make a pilgrimage to Egypt - to Giza, site of The Great Pyramid

This novel put me on a parallel path with it's protagonist because my reading it was comparable to his going on a challenging quest convoluted in it's content, spiritual in it's nature. So, chapter after chapter he and I forged ahead, gazing at a bell tower, contemplating enigmas, stumbling here, catching up there, baffled, skeptical, on and on, over the Atlantic, across the Sahara, down deep wells, through dark tunnels, along stone walls until all the plot twists are exhausted and everything finally comes together proving Savion to be a visionary as, in a burst of epiphany, Brigham's purpose for existing is revealed, a reality which - you guessed it - was right before his eyes! With hope for a new age of enlightenment embodied in the ascendant Brigham Elijah, "The Savion Sequence" rather than coming to a close, remains open-ended. This, however, was just one focus of this book about mysticism, and what else resonated with me was the reaffirmation of my belief that at the core of all religions, is a promise that whatever God can do, we will be able do because God dwells, not in heaven but within the temples of our bodies, - inside the chambers of our brains where one day we, in our highest mind-set, will become divine.

Elsewhere, Jackson does an adequate job of developing his characters, with the assassins being sufficiently menacing and the other cast members reasonably credible in filling their roles. And although the book's settings jumped around, I followed the advice of it's sage namesake Savion and endeavored to "go with the flow", buoyed by the occasional spurts of interesting lore and sly humor that surfaced from it's sea of words. Or, did the author's writing skills disappoint and, certainly, D. Imari Jackson's partisan pride in the college where a lot of the book's action took place served to remind that the University of North Carolina is a historic institution with more going for it than being the alma mater of Michael Jordan.

Weighing in at 237 double-spaced pages, "The Savion Sequence" also earns points for not being too long, and that, alone, is enough for me to award it 3 out of possible 4 stars.