Book Review: How We Fight for Our Lives: A Memoir 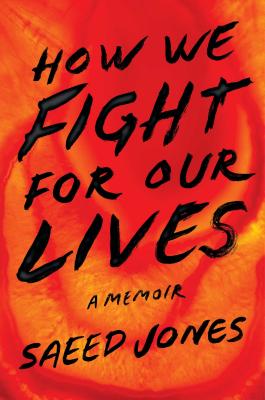 Read a Description of How We Fight for Our Lives: A Memoir

As a recipient of the Pushcart Prize, and fellowships from Cave Canem and Queer/Art/Mentorship, Saeed Jones is a poet and the author of Prelude to Bruise (2014). Prelude to Bruise was a finalist for the National Book Critics Circle award. His most recent book, How We Fight for Our Lives: A Memoir (2019), is his biography to the world detailing events that have shaped his unique narrative.

Nevertheless, this memoir is a story brimming with elements connecting Jones to poetry, to every black predecessor in the country, and to every person with a shared dream of gaining an opportunity at upward social mobility through an education that they could not afford. This memoir is fierce and knocks you out of breath with each page you turn, it is almost impossible to put the book down. It is the sword and armor a warrior would take into battle with them, and the battle cry that echoes afterward. It is a memoir in poetic fragments pieced together with such skill; it leaves one in chills for the entire read. Jones leaves nothing out as he becomes exceptionally personal, emotionally gritty, and unflinchingly candor, How We Fight for Our Lives is a perfect harmony of hostility, hope, violence, love, acceptance of self, transformation and resentment.

The readers find themselves growing alongside Jones—learning he was born in Memphis, Tenn., and grew up in Lewisville, Texas. He later moved to Kentucky to earn his BA at Kentucky University and then onwards to New Jersey for his MFA at Rutgers University-Newark. While his background was continually changing, there were constants in his life: his mother; his family, his love for words, and his sexuality. Jones was aware of his sexuality when he was still young, but it took years to grow into his own skin and feel comfortable in it. His memoir points out how keenly aware he is of racism, homophobia, and discrimination work in this country how toxic they are, and how they mentally aware they made him as an openly gay black man living here. He tells of his struggles he endured and the journey to find and (re)define himself, his identity after every milestone at the heart of his book. At its heart—it wants to communicate its humanity with the world desperately.

One of the many fascinating aspects of Jones’ book is how he concerns himself not only with who he is as a person but the process in which one goes through to find our self. His story is his, but he is cognizant it lives in a space that is larger than himself; it connects him to the past. He acknowledges the inevitability of particular events in obtaining the “I” and how painful it can be:

“People don’t just happen. We sacrifice former versions of ourselves. We sacrifice the people who dared to raise us. The ‘I’ it seems doesn’t exist until we are able to say, ‘I am no longer yours.’ My grandmother and I, without knowing it, were faithfully following a script that had already been written for us. A woman raises a boy into a man, loving him so intensely that her commitment finally repulses him.”

During the events of How We Fight for Our Lives, Jones depicts a system infamous for tearing down single mothers and his survival of this brutal cycle. He persists to be himself without restriction in a society where angry and close-minded men attack him for being gay without justification. He fights for his survival, and when he recognizes survival is not all there is to living, he starts to fight to thrive, to make his life and everything he does matter. He fights this hard like death is clinging to him, looming over his shoulder every step of the way, because it is:

Jones’ memoir is an exhilarating, tear-jerking, and touching book that does not shy away from revealing the darkest parts of racism, family drama, racially charged sexual encounters, violence. How We Fight for Our Lives is the reflection of the author, full of fear yet courage, the courage to overcome his obstacles, and admitting he was in the process of learning and understanding. To endure this process and this fear with sheer will when it seemed as if the world stood against him.

How We Fight for Our Lives is about the tenacity and strength of Jones’ character. As a coming-of-age novel, it is also a collection of the small, but impactful joys that occurred. It is a book bringing a breeze of hope to many.

Read Simon & Schuster’s description of How We Fight for Our Lives: A Memoir.