Book Review: The New Jim Crow: Mass Incarceration in the Age of Colorblindness 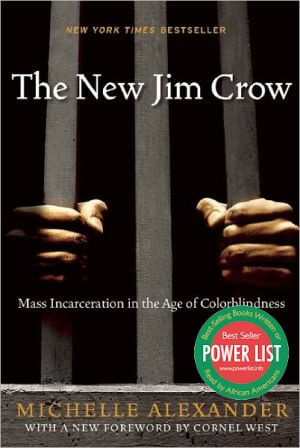 Read a Description of The New Jim Crow: Mass Incarceration in the Age of Colorblindness

”Precisely how the system of mass incarceration works to trap African-Americans in a virtual (and literal) cage can best be understood by viewing the system as a whole… The first stage is the roundup [when] vast numbers of people are swept into the criminal justice system by the police, who conduct drug operations primarily in poor communities of color…

Once arrested, defendants are generally denied meaningful legal representation and pressured to plead guilty, whether they are or not. Once convicted… virtually every aspect of one's life is regulated and monitored by the system.

The final stage… often [has] a greater impact on one's life course than the months or years one actually spends behind bars. [Parolees] will be discriminated against, legally, for the rest of their lives—denied employment, housing, education, and public benefits. Unable to surmount these obstacles, most will eventually return to prison and then be released again, caught in a closed circuit of perpetual marginality.”
—Excerpted from Chapter 5 (pgs. 180-181)

Now that bloom has fallen off the rose of the Obama Administration, most black folks are beginning to wake up to the fact that his election isn't about to turn the country into a post-racial utopia any time soon. To the contrary, attorney Michelle Alexander argues that in recent decades America has increasingly, and ever so subtly, adopted a color-coded caste system where minorities are targeted, stigmatized and marginalized by the criminal justice system.

Alexander, a Professor of Law at Ohio State University, makes her very persuasive case in The New Jim Crow: Mass Incarceration in the Age of Colorblindness, a scathing indictment of the widespread practice of selective enforcement of draconian drug laws. Ostensibly, the aim of the U.S. government has been not only to warehouse masses of African-American males behind bars, but to relegate them permanently to a subordinate stratum of society even after they're paroled.

For the author explains that upon release, a person convicted of a petty narcotics violation "may be ineligible for many federally-funded health and welfare benefits, food stamps, public housing, and federal assistance." Furthermore, "His driver's license may be automatically suspended, and… he will not be permitted to enlist in the military… or obtain a federal security clearance. If a citizen, he may lose the right to vote; if not, he becomes immediately deportable."

Although there's a black man in the White House, Ms. Alexander expects her call for prison reform to fall on deaf ears. After all, she cites as "disturbing, to say the least," Obama's famous Father's Day speech in which he in which he indicted AWOL baby-daddies "without ever acknowledging that the majority of young black men in large urban areas are currently under the control of the criminal justice system."

This sister obviously has some serious issues with the President, since she also reminds her readers about his confessing to snorting coke all the coke he could afford and to smoking pot frequently during his wayward youth. She does this because she feels he ought to be more empathetic about the plight of the millions of African-Americans whose lives were ruined after being found guilty only of the same sort of transgressions he freely owned up to in his autobiography.

If Alexander holds any hope for our future, it rests in raising the country's collective consciousness about the role the Apartheid-like legal system plays in perpetuating oppression along the color line. Her goal is to achieve this by generating some frank dialogue which might lead to a social movement on behalf of the vast underclass of unfairly-criminalized social pariahs.

Read The New Press’s description of The New Jim Crow: Mass Incarceration in the Age of Colorblindness .