Book Review: High On The Hog: A Culinary Journey From Africa To America 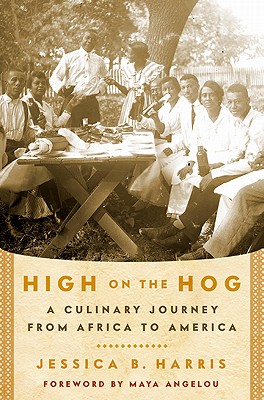 by Jessica B. Harris

Read a Description of High On The Hog: A Culinary Journey From Africa To America

"We [African-Americans] are a race that never before existed: a cobbled together admixture of Africa, Europe, and the Americas… Involuntarily taken from a homeland, molded in the crucible of enslavement, forged in the fire of disenfranchisement, and tempered by migration, we all too often remain strangers in the only land that is ours.

Despite all this, we have created a culinary tradition that has marked the food of this country more than any other. Our culinary history is fraught with all the associations with slavery, race, and class that the United States has to offer…

For centuries, black hands have tended pots, fed babies, and worked in the kitchens of this country's wealthiest and healthiest. The disrespect for our food and for the people who cook it has been a battle that has raged for decades.

[High on the Hog] is a personal look at the history of African-American food… which has led me on an odyssey as well as opened doors in my life, my mind, and my soul."
--Excerpted from the Introduction (pgs. 1-4)

When most people think of African-American cuisine, what generally comes to mind is so-called "Soul Food." But black folks can cook a lot more besides such beloved staples as barbecued ribs, pigs' feet, fried chicken, chitlins, collard greens, black-eyed peas and rice, yams and potato salad.

Equally-frustrating is the tendency to denigrate the African-American diet as somehow second-rate because during ante-bellum days the slaves were generally only allowed to eat the discarded parts of the livestock that the slave master didn't care for. But that attitude ignores the creativity that still went into making those scraps taste delicious and the fact that blacks also served as chefs on the plantations.

Furthermore, Africans arrived on these shores with rich cultural traditions, many of which miraculously managed to survive the Middle Passage and centuries of slavery. Consequently, astute scrutiny of the subject might lead to a linking of offerings currently found on kitchen tables in the black community to their ancestral roots back on the continent.

That is precisely the task undertaken by Jessica B. Harris in High on the Hog: A Culinary Journey from Africa to America. Professor Harris, who teaches at Queens College in New York, has previously penned ten cookbooks documenting foods from the African Diaspora.

This seminal contribution to the field's literature is designed to feed your mind as much as your tummy, for it brilliantly combines an array of fascinating history lessons with some easy-to-follow, mouth-watering recipes. Among the delectable dishes the opus shows how to prepare are Possum, Porgies, Grits, Gumbo and Summer Southern Succotash.

A dessert called Snow Eggs is attributed to James Hemings, Thomas Jefferson's chef at Monticello and an elder brother of Sally Hemings, the President's longtime mistress and mother of six of his offspring. I'm inspired by nostalgia to try Bean Pie, a childhood favorite from the Nation of Islam I had completely forgotten about.

Read Bloomsbury USA’s description of High On The Hog: A Culinary Journey From Africa To America.