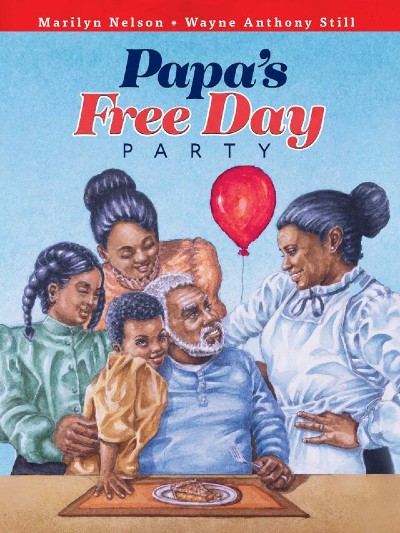 Papa’s Free Day Party highlights many timely issues, including the meaning of freedom, the impact of allyship, the importance of Black history and family stories, and how everyday actions can drive powerful change.

Johnnie wants to celebrate her Papa’s birthday, but Papa doesn’t know exactly when that special day is. Johnnie doesn’t understand how that could be. Then she learns about Papa’s childhood how he escaped Night Riders, the family that took him in, and how he built a new life in the all-Black town of Boley, Oklahoma. Inspired by her father’s incredible story, Johnnie decides to throw Papa a different kind of party one to recognize her father’s day of freedom.

ABOUT THE AUTHOR
Marilyn Nelson is the author or translator of more than 20 books and chapbooks for adults and children. Her critically acclaimed books for young readers include A Wreath for Emmett Till, Fortune’s Bones, Carver: A Life in Poems, a Newbery Honor Book and recipient of the Boston Globe/Hornbook and the Fiora Stieglitz Straus Awards. Her memoir, How I Discovered Poetry, is a Coretta Scott King Honor Book and was named one of NPR’s Best Books of 2014. A three-time finalist for the National Book Award, her many honors include the Frost Medal, the NSK Neustadt Award and the Ruth Lilly Poetry Prize. She was Poet Laureate of Connecticut, 2001 - 2006.

ABOUT THE ILLUSTRATOR
Wayne Anthony Still is an award-winning illustrator, painter, designer and sculptor. He holds a Bachelor of Fine Arts degree in illustration and graphic design from the University of the Arts in Philadelphia, Pennsylvania. His work includes exquisitely designed figurines, collector’s stamps for international governments and masterful plates as well as paintings and illustrations. He lives in Pennsylvania near the city of Philadelphia where another famous member of his family, William Still, was an active leader and historian-conductor of the Underground Railroad.

ABOUT THE PUBLISHER
Just Us Books is an independent, Black-owned publisher of children’s books that celebrate the diversity of Black people, history, and culture. Founded in 1988 by husband-and-wife team, Wade and Cheryl Hudson, its titles range from board books for infants to novels for young adults and have helped the company win numerous awards for its contributions to publishing, including Small Business Pioneer of the Year and the Children’s Book Council Diversity Outstanding Achievement Award. In more than 32 years of operation, Just Us Books has become an institution in children’s publishing and remains one of the nation’s few Black-owned presses. Just Us Books titles can be purchased wherever books are sold and through its web site: www.justusbooks.com

Connect with Just Us Books on social @JustUsBooks across platforms.