“Henceforth Blacks should speak to themselves and for themselves. No other can speak for us.”
—Samuel Cornish, publisher of Freedom’s Journal, the first African-American owned and operated newspaper published in the US. 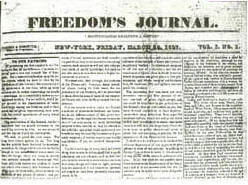 Freedom’s Journal: the 1st African American owned and operated newspaper in the U.S.

The following is a list of independent, Black-owned newspapers.  Most are members of the National Newspaper Publishers Association (NNPA).

Support local independent newspapers by sharing this list on your website, and invest in your community by subscribing to your local newspaper today. Learn more about the development of the Black press in the video The Black Press: Soldiers Without Swords


Negro World: A Newspaper Dedicated to the Interests of the Negro Race
Founded by Marcus Mosiah Garvey and Amy Ashwood Garvey, Negro World was published weekly in Harlem, New York, and distributed internationally to the UNIA’s chapters in more than forty countries. Published from 1917 to 1933, aAt its peak Negro World reached a circulation of 200,000 and was an important component of the Garvey Era, also known as the Harlem Renaissance.

The Black Press: Soldiers Without Swords