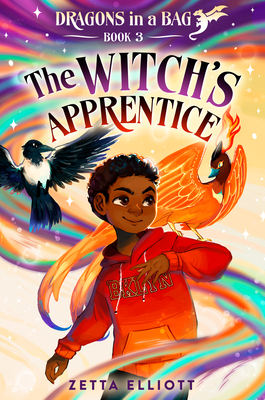 With the publication of The Witch’s Apprentice, the third installment in the acclaimed series, readers will now be able to binge read all three books at once, or savor their reading experience by exploring each book individually. Join Jaxon and his friends through a reimagined New York City and Chicago as they embark on their latest adventure to unlock the mystery behind a strange sleep sickness engulfing the city.

I try to tell stories that give voice to the diverse realities of children. I write as much for parents as I do for their children because sometimes adults need the simple instruction a picture book can provide. I write books my parents never had the chance to read to me. I write the books I wish I had had as a child.”

With magic, adventure, dragons and a thrilling journey that Jax must take to save his city, The Witch’s Apprentice ushers in a fast paced and thrilling story sure to capture the imagination of young readers.

The dragons may be out of the bag, but Jaxon is ready to hatch some magic of his own in this third book in the critically acclaimed series.

Ever since the baby dragons were returned to the magical realm, things have been off. The New York summer has been unusually cold. A strange sleeping sickness is spreading across the city. And Jaxon’s friends Kenny and Kavita have begun to change, becoming more like the fairy and dragon they once cared for.

On top of all that, Jax is hiding a secret—Vik entrusted him with a phoenix egg! Jax wants to help his friends and learn how to hatch the phoenix, but so far his lessons as a witch’s apprentice haven’t seemed very useful. Where can he find the strength—and the magic—he needs?