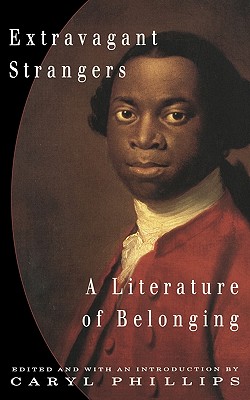 Extravagant Strangers: A Literature of Belonging
by Caryl Phillips

Book Description:
Shakespeare called Othello "an extravagant and wheeling stranger/Of here and every where." In this exciting anthology, Caryl Phillips has collected writings by thirty-nine extravagant strangers: British writers who were born outside of Britain and see it with clear and critical eyes. These eloquent and incisive voices prove that English literature, far from being pure or homogenous, has in fact been shaped and influenced by outsiders for over two hundred years.

Here are slave writers, such as Ignatius Sancho, an eightieth century African who became a friend to Samuel Johnson and Laurence Sterne; writers born in the colonies such as Thackeray, Kipling, and Orwell; "subject writers," such as C.L.R. James and V.S. Naipaul; foreign migr s, such as Joseph Conrad and Kazuo Ishiguro; and postcolonial observers of the British scene, such as Salman Rushdie, Ben Okri, and Anita Desai. With the eloquent and often inspiring collection, Phillips proves, if proof be needed, that the greatest literature is often born out of irreconcilable tensions between a writer and his or her society.

More books like Extravagant Strangers: A Literature of Belonging may be found by selecting the categories below: