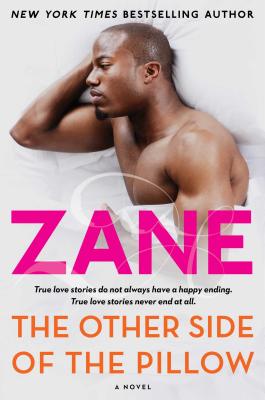 Zane’s The Other Side of the Pillow: A Novel
by Zane

The New York Times bestselling Queen of Erotica, Zane is back with a new novel about a testy love affair that emerges between a woman who s had enough and a man who s had it all.

Jemistry Daniels is a bitter woman and not trying to hide it. Even though she is beautiful, intelligent, and makes six figures a year as a high school principal in Washington, DC, one man after another has failed her. So she decides to give up and join the party by adapting the entire friends with benefits mentality with a couple of men that she beds on the regular but refuses to hold any kind of real conversation with, in fear that she might actually catch feelings.

Everything is going according to plan until she meets Dr. Tevin Harris, a prominent vascular surgeon, one night at a poetry slam. Tevin listens to her deliver her male-bashing poem and instead of steering away from her like most men with any common sense would do, he asks her out. Tevin has been casually dating for years, ever since his failed marriage to Estella. They had suffered several miscarriages and the emotional pain had become too much for either one of them to bear and still wake up with each other every morning.

Opening up, gaining trust, tearing down barriers, and ultimately, having the audacity to love again is not easy for either Jemistry or Tevin. It takes a lot of transparency, emotional honesty, and patience to even begin to build a life together by helping each other rebuild what has been broken. The Other Side of the Pillow examines, explores, and exposes what it means to truly fall in love. It proves that true love stories do not have a happy ending. True love stories never end at all.

More books like Zane’s The Other Side of the Pillow: A Novel may be found by selecting the categories below:

Tell us what do you think about Zane’s The Other Side of the Pillow: A Novel.