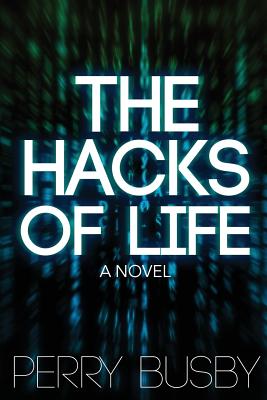 The Hacks of Life
by Perry Busby

Paperback Description:
It’s 1993, and the technology industry is on the verge of introducing a groundbreaking new technology called the Internet. The rules for this high-stakes game are clear: Get on board or get left behind. Intellect Technology Inc. has brokered a game-changing deal with WorldNet Labs in a move that will secure its position as the leading tech company. But the threat of an EEOC scandal, sordid family alliances, and a stolen laptop leave ITI’s executive staff to wonder if their dream deal will turn to dust before it ever materializes, taking the fate of the struggling company with it. Phil Jacobson, a young African-American programmer, may be the only one with an answer …After years of assisting his private detective father on the job and honing his skills as the PhantomPhixer in the Underground, Phil lands his first job in Corporate America. Phil’s father hopes his son’s cushy job at ITI will derail any chance of Phil following in his footsteps as a detective. But when Phil discovers that a hacker contact has evidence that points to his employment at ITI as part of an egregious cover up, it becomes apparent that he has inherited more than just his father’s abhorrent name. Philander Wesley Jacobson is just as much a natural sleuth as his seasoned father, like it or not.Phil forms an unexpected alliance with a fellow hacker, and with his sister’s help, they’re in a race to uncover the truth about ITI before the company closes the WorldNet deal. If for nothing else, Phil must protect the interests of one of his best friends, the founder of WorldNet Labs. The investigation turns dangerous and almost deadly as Phil and his amateur P.I. team dig up ITI’s repugnant secrets, involving a pile of resumes, hidden assets, and the founder of the company’s affiliation with a secret society known as CLANS. Phil certainly didn’t expect to have to tackle all of these glitches just two weeks before his wedding, but he quickly learns that expectations are nothing more than liabilities when dealing with the Hacks of Life.The Hacks of Life is Perry Busby’s debut novel. When he isn’t writing, Perry works as a data analyst. After a thity year professional career in the public and private sector, as well as developing grassroots techical training programs for youth in urban communities, he turns his keyboard and attention to writing stories about a career that has been just as adventuresome as it’s been nerdy.

More books like The Hacks of Life may be found by selecting the categories below: