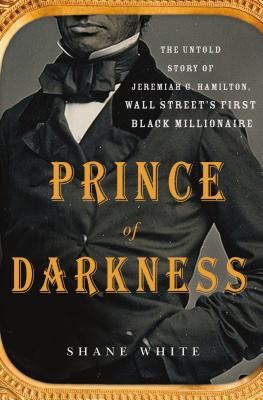 Hardcover Description:
In the middle decades of the nineteenth century Jeremiah G. Hamilton was a well-known figure on Wall Street. Cornelius Vanderbilt, America’s first tycoon, came to respect, grudgingly, his one-time opponent. The day after Vanderbilt’s death on January 4, 1877, an almost full-page obituary on the front of the National Republican acknowledged that, in the context of his Wall Street share transactions, "There was only one man who ever fought the Commodore to the end, and that was Jeremiah Hamilton." What Vanderbilt’s obituary failed to mention, perhaps as contemporaries already knew it well, was that Hamilton was African American. Hamilton, although his origins were lowly, possibly slave, was reportedly the richest colored man in the United States, possessing a fortune of $2 million, or in excess of two hundred and $50 million in today’s currency. In Prince of Darkness, a groundbreaking and vivid account, eminent historian Shane White reveals the larger than life story of a man who defied every convention of his time. He wheeled and dealed in the lily white business world, he married a white woman, he bought a mansion in rural New Jersey, he owned railroad stock on trains he was not legally allowed to ride, and generally set his white contemporaries teeth on edge when he wasn’t just plain outsmarting them. An important contribution to American history, Hamilton’s life offers a way into considering, from the unusual perspective of a black man, subjects that are usually seen as being quintessentially white, totally segregated from the African American past.

Books similiar to Prince of Darkness: The Untold Story of Jeremiah G. Hamilton, Wall Street’s First Black Millionaire may be found in the categories below: