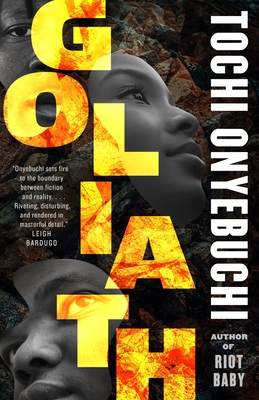 "Onyebuchi sets fire to the boundary between fiction and reality, and brings a crumbling city and an all too plausible future to vibrant life. Riveting, disturbing, and rendered in masterful detail."—Leigh Bardugo

In his adult novel debut, Hugo, Nebula, Locus, and NAACP Image Award finalist and Alex and New England Book Award winner Tochi Onyebuchi brings us a sweeping sci-fi epic in the vein of Samuel R. Delany and Station Eleven Goliath explores the city of New Haven as a primal biblical epic flung into the future. What happens to the people who get pushed out? A David and Jonathan story that throws readers into the history and sins of the Connecticut metropolis, this ambitious, sprawling novel weaves together disparate narratives—a space-dweller looking at New Haven as a chance to reconnect with his spiraling lover; a group of civil servants attempting to renew the promises of Earth’s crumbling cities; a journalist attempting to capture the violence of the streets—into a richly urgent mosaic about race, class, gentrification, and who is allowed to be the hero of any history.

More books like Goliath may be found by selecting the categories below: