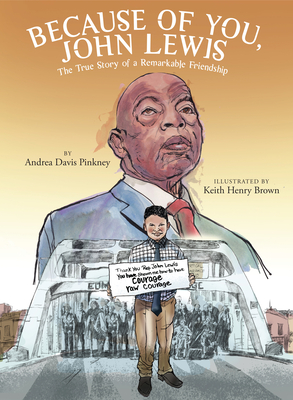 Because of You, John Lewis
by Andrea Davis Pinkney, Illustrated by Keith Henry Brown

Ten-year-old Tybre Faw is obsessed with history and the civil rights movement, and he devours every book he can find on the subject. When he learns of Congressman John Lewis’s harrowing and heroic march across the Edmund Pettus Bridge in the fight for the right to vote, Tybre is determined to meet him.

Tybre’s two grandmothers take him on the seven-hour drive to Selma. And as the two meet and become fast friends, Tybre joins Lewis for the annual walk across the Edmund Pettus Bridge!

When John Lewis is laid to rest, Tybre is invited to read Lewis’s favorite poem, Invictus, at the funeral service. Pinkney weaves this story of a boy with a dream—with the story of a true-life hero (who himself was inspired by Martin Luther King when he was a boy). Both John Lewis and Martin Luther King, Jr. have left indelible marks on future generations. Will Tybre be next to carry the mantle?

More books like Because of You, John Lewis may be found by selecting the categories below: