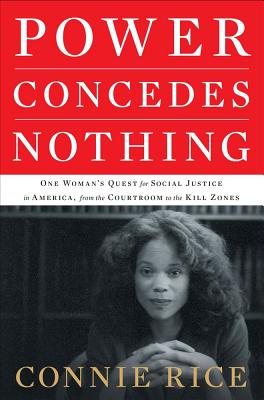 Power Concedes Nothing: One Woman’s Quest for Social Justice in America, from the Courtroom to the Kill Zones
by Connie Rice

Book Description:From one of the nation’s most influential civil rights attorneys second cousin of former Secretary of State Condoleezza Rice a noble, hard-hitting

memoir chronicling the life of a fiercely powerful woman dedicated to public service. Connie Rice has taken on the bus system, the school system, the death penalty, the LAPD and won. She has been at the forefront of dozens of major civil rights cases. In 1998, the Los Angeles Times designated Connie Rice one of the “most experienced, civic-minded, and thoughtful people on the subject of Los Angeles.” Rice literally wrote the report that has revolutionized the city’s law enforcement and outreach to gangs. Now, one of America’s most prominent and successful civil rights litigators, Rice illuminates

the origins and inspiration for

her life’s work in this extraordinary memoir. In her electrifying voice, Rice writes of being descended from a “proud and erudite clan” of former slaves and slaveowners who prized “the aggressive pursuit of knowledge and voracious accomplishment.” The Rice family’s quest for excellence was the defining feature of Connie’s youth, a childhood that would see her family move seventeen times across three continents, at the behest of the U.S. Air Force, for which her father was a racial-barrier-breaking major. The eldest of three children, Connie was inspired by influential women like Queen Elizabeth I, Anne Frank, and Rep. Barbara Jordan the first black woman elected to U.S. Congress from a Southern State whose eloquence and composure during the televised Watergate hearings so mesmerized a teenage Rice that she burned a hole ironing her father’s shirt. Provocative and passionate, studded with dramatic stories of a life in the trenches of civil rights law, Power Concedes Nothing reveals the inspiring life of an indomitable woman who knows that power concedes nothing without a demand.

More books like Power Concedes Nothing: One Woman’s Quest for Social Justice in America, from the Courtroom to the Kill Zones may be found by selecting the categories below:

Tell us what do you think about Power Concedes Nothing: One Woman’s Quest for Social Justice in America, from the Courtroom to the Kill Zones.