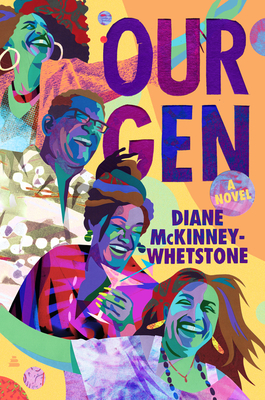 Our Gen
by Diane McKinney-Whetstone

Our Gen, short for Sexagenarian, is a fifty-five-plus active living community in a bucolic setting outside of Philadelphia. Cynthia, is new to the Gen. She’s moved there reluctantly at the urging of her son and quickly forges friendships with the two other Black residents, Bloc and Tish, and Lavia who everyone assumes is from India. They commune regularly at Tish’s carriage house where Bloc brings the weed and they dance to James Brown and play Pinochle and talk politics and philosophy as the wine goes down like silk. They feel a sense of exhilaration, liberation, as if they are 40 years younger living at the High Rise Dorm at Penn. But beneath the lightness and froth, storms gather as the time-bomb secrets of their pasts tick toward explosion.

The novel shifts back and forth in time from the music, moods and eccentricities of the Black Philadelphia neighborhoods of the Sixties and Seventies, to the current day scenes of the Gen’s breathtaking topography and transplanted heirloom trees. Both serve as backdrops to the characters’ explorations of regret, longing, and desire, as they attempt to hide from their pasts.

Our Gen is part love story, part family drama, part portrait of life’s changing seasons with all of the fine-line wrinkles, scars, tenderness, and swagger for readers of all ages. It explores the never-ending quest to grow up, to figure out the what’s it all about—even for people living at a retirement village who are coming to the mean realization that life is finite after all—who knew.