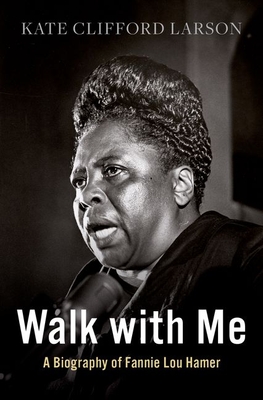 Walk with Me: A Biography of Fannie Lou Hamer
by Kate Clifford Larson

Hardcover Description:
Few figures embody the physical courage, unstinting sacrifice, and inspired heroism behind the Civil Rights movement more than Fannie Lou Hamer. For millions hers was the voice that made "This Little Light of Mine" an anthem. Her impassioned rhetoric electrified audiences. At the Democratic
Convention in 1964, Hamer’s televised speech took not just Democrats but the entire nation to task for abetting racial injustice, searing the conscience of everyone who heard it. Born in the Mississippi Delta in 1917, Hamer was the 20th child of Black sharecroppers and raised in a world in which
racism, poverty, and injustice permeated the cotton fields. As the Civil Rights Movement began to emerge during the 1950s, she was struggling to make a living with her husband on lands that her forebears had cleared, ploughed, and harvested for generations. When a white doctor sterilized her without
her permission in 1961, Hamer took her destiny into her own hands. Bestselling biographer Kate Clifford Larson offers the first account of Hamer’s life for a general audience, capturing and illuminating what made Hamer the electrifying force that she became when she walked onto stages across the country during the 1960s and until her death in 1977. Walk with Me
does justice to the full force of Hamer’s activism and example. Based on new sources, including recently opened FBI files and Oval Office transcripts, the biography features interviews with some of the people closest to Hamer and conversations with Civil Rights leaders who fought alongside her.
Larson’s biography will become the standard account of an extraordinary life.

Books similiar to Walk with Me: A Biography of Fannie Lou Hamer may be found in the categories below: