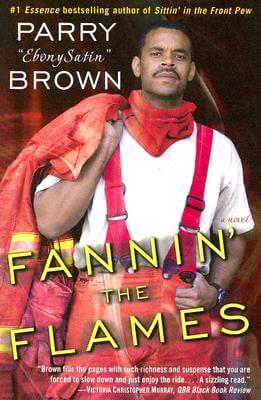 Fannin’ The Flames: A Novel
by Parry Brown

Book Description:
The fire and rescue squad from Los Angeles County’s Fire Department Station Twenty-seven’s “C-Shift” was a rock-solid team. The camaraderie among them was only made stronger by the fact that they were all minority. But when their unit becomes the prey of a perverse trickster, their loyalties to one another are deepened to the core.

Someone on the inside is trying to sabotage C-Shift, and Jerome White and his longtime mentor, Capt. Lloyd Frederickson, are certain it’s racially motivated. When the Fire Department chief balks at an internal investigation, Lloyd and Jerome have no choice but to take matters into their own hands.

Jerome and Lloyd’s personal problems further complicate their lives. After thirty years of marriage, Lloyd’s wife, Nellie, wants a divorce, even though their sex life is still deliciously hot. And while Jerome and Nicolle are deeply in love, Mychel Hernandez, a Hispanic bombshell at the station, has set her sights on Jerome. But his attentions soon turn to a horrific car accident involving Nicolle. As Jerome is thrown headfirst into this nightmare, he must face life as a single father, a critically ill spouse, Mychel turning up the heat with her advances, and an overwhelming sense of fear and apprehension about where the menace will next strike.

From the #1 bestselling author Parry “EbonySatin” Brown comes her anticipated hardcover debut—a fast-paced, multilayered story of extraordinary characters grappling with issues of race, family, love, and deceit. In Fannin’ the Flames, she brings readers to the forefront of the lives of our most revered men—and the women they love.

More books like Fannin’ The Flames: A Novel may be found by selecting the categories below:

Tell us what do you think about Fannin’ The Flames: A Novel.