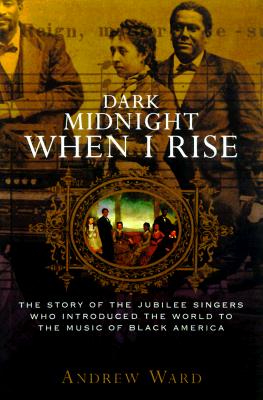 Dark Midnight When I Rise: The Story of the Jubilee Singers, Who Introduced the World to the Music of Black America
by Andrew Ward

Read Our Review of Dark Midnight When I Rise: The Story of the Jubilee Singers, Who Introduced the World to the Music of Black America

Hardcover Description:
Dark Midnight When I Rise tells the story of a troupe of young ex-slaves and freedmen whose odyssey from cotton field and auction block to concert stage and throne room is one of the most remarkable trajectories in American history. Singing the sacred hymns of their ancestors, the Fisk Jubilee Singers introduced the world to African American music. They enchanted such luminaries as Ulysses S. Grant, Frederick Douglass, Mark Twain, Queen Victoria, and Prime Minister William Gladstone, and demonstrated to millions of white Americans and Europeans the courage, dignity, and intelligence of African Americans. The Jubilees set out in the fall of 1871 to raise money for Nashville’s nearly bankrupt Fisk University, one of many black schools established after the Civil War to teach reading and writing to the tens of thousands of emancipated slaves who clamored for an education. Ejected from hotels and railroad cars, shivering in the winter cold, the bedraggled singers performed along the route of the old Underground Railway to Brooklyn, where, a few days before Christmas, they sang for Henry Ward Beecher’s Plymouth Church congregation. They caused such a sensation that soon they were raising thousands of dollars a week performing to overflow audiences up and down the Eastern Seaboard. After tours of Great Britain, Holland, Switzerland, and Germany, they not only rescued Fisk but built it into one of the nation’s preeminent African American institutions of higher learning. The Jubilees introduced scores of spirituals, from "Steal Away" to "Swing Low, Sweet Chariot," with such soulful artistry they moved throngs to tears. But their contribution extended beyond their music. Forced to do daily battle with American racism in the dark midnight of Reconstruction, they bravely denounced segregation from choir lofts and concert stages, forcing the issue of discrimination onto the world’s front pages. In their wake, Northern hotels, railroads, and schools opened their doors to blacks. Their success came at great cost. The eloquent Benjamin Holmes, who had taught himself to read as a slave, died of tuberculosis. Pious Julia Jackson, who as a small girl had helped her relatives escape from bondage, suffered a paralytic stroke. Frail, stalwart Ella Sheppard, the matriarch of the Jubilees, nearly died of pneumonia after seven years of unceasing toil. As they struggled to overcome exploitation and prejudice, the Jubilees transformed American music forever, foreshadowing the triumphs and travails of thousands of black performers. Based on the singers’ own letters, memoirs, and diaries, Dark Midnight When I Rise is a compelling and deeply moving testament to the inherent decency of all men and women, and the power of art to change the heart of a nation.

Books similiar to Dark Midnight When I Rise: The Story of the Jubilee Singers, Who Introduced the World to the Music of Black America may be found in the categories below: