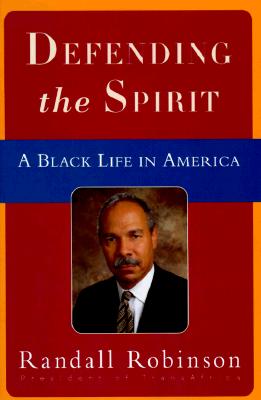 Defending the Spirit: A Black Life in America
by Randall Robinson

In 1977, Randall Robinson founded TransAfrica, the first organization to lobby for the interests of African and Caribbean peoples, and it became the galvanizing force behind the anti-apartheid boycott of South Africa, spearheaded efforts to secure the release of Nelson Mandela, and mobilized the fight to reinstate President Aristide and restore democracy in Haiti. Defending the Spirit tells the story of Robinson’s rise from childhood in the segregated South to his role as a Washington power figure. A stunning and uplifting memoir, it also offers stinging commentary on American policies in Africa and the Caribbean, where racism still plays an unfortunate role. Impassioned, charismatic, and unwavering in his convictions, Robinson emerges as an inspiring and empowering example of a great American leader.

More books like Defending the Spirit: A Black Life in America may be found by selecting the categories below:

Tell us what do you think about Defending the Spirit: A Black Life in America.