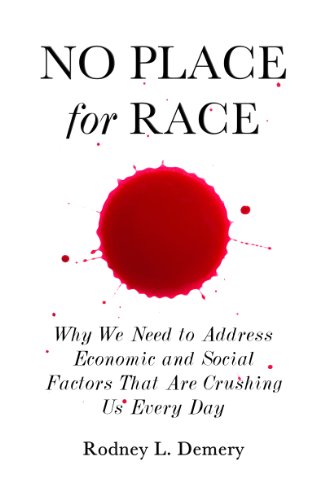 No Place for Race
by Rodney L. Demery

Read Our Review of No Place for Race

Book Description:
On an autopsy table, we all look the same. Not black. Not white. Just human.
And we all bleed red.
America has made many strides in our lifetime, including electing a president who is black. But race continues to be a central theme for many, causing them to attribute racial motivations to law enforcement, social policies, and laws. Race, though, has become less of a barrier or defining issue, as blacks have gained access to every corner of American government and public life.
In No Place for Race, Rodney L. Demery shows why his experience as a longtime officer of the law shows that issues blamed on race often have other causes. Demery urges that we stop using the oversimplified and easy answer of race, but instead delve deeper to look at the causes of issues that plague our families and communities. When we open ourselves up to the possibility of a social or economic cause or component to a problem, we also open ourselves up to the possibility that we can come up with a real answer to that problem, for we all want the same things.
This book will show you why: 1) Police racial profiling may be the result of the failure of black police administrators and policy makers rather than white supremacists. 2) Forty years of failed drug policies have put more drugs on the streets; and failed to reduce either supply or demand. 3) Black preachers have failed their communities and perpetuated a fear of nonexistent systemic racism, so they can profit from the fear. 4) George Zimmerman was the exception, not the rule: The most vital threat to a black man is a black man. 5) We have overcome, but many have failed to acknowledge it … even to themselves.
This book starts a discussion about the issues that are wrecking your community, moving us beyond race and focusing on the real dangers that are threatening our lives every day.