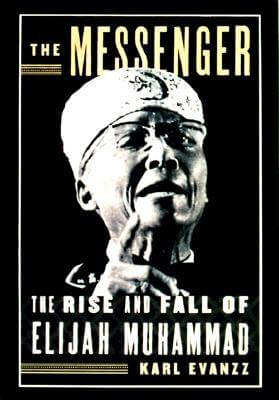 The Messenger : The Rise and Fall of Elijah Muhammad
by Karl Evanzz

Hardcover Description:
Here, eagerly anticipated, is the definitive biography of Elijah Muhammad (né Elija Poole), a sharecropper’s son with a fourth- grade education who became one of the most controversial Americans of the twentieth century, the founder and "Prophet" of the Nation of Islam, a movement dedicated to black separatism and self-empowerment.


Though Muhammad’s main argument—that white people were innately evil ("devils," he called them)—ran counter to the precepts of orthodox Islam, he was the chief influence in the conversion of nearly four million African Americans to Islam, touching in the process the lives of figures ranging from Muhammad Ali and Jesse Jackson to Malcolm X and Louis Farrakhan. But in his desperate grasp for power, Muhammad also amassed a huge personal fortune at the expense of his followers. He was a party to ritualistic homicides, had illicit affairs galore, and was quick to betray his friends and charges, most notably Malcolm X. In brief, he violated every ideal and principle that he espoused.


With the cooperation of some of Elijah Muhammad’s children and former apostles and with access to previously unreleased FBI files, Karl Evanzz gives us an unprecedented account of the life of the man whose philosophy continues, long after his death, to shape race relations in America.

More books like The Messenger : The Rise and Fall of Elijah Muhammad may be found by selecting the categories below: