Skyscraper: A Novel by Zane 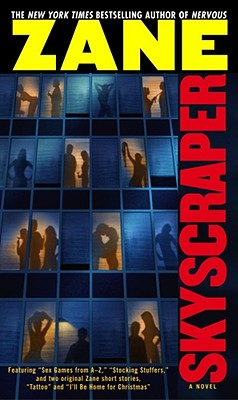 Skyscraper: A Novel
by Zane

Book Description:
Most corporations hand out bonus checks or gift certificates for Christmas, but Wolfe Industries hands out drama. Skyscraper chronicles the week before the annual Christmas party at Wolfe Industries, an African American-owned automobile manufacturer.
Chico, a nineteen-year-old mail-room clerk who still lives with his overprotective mother, is the typical young man when it comes to sex. He doesn’t turn it down. So, when Zetta Wolfe, the wife of CEO Tomalis Wolfe, attempts to seduce him, he jumps at the opportunity. Meanwhile, Anastasia, a twenty-five-year-old secretary, along with her best friend and coworker, Shakia, spends her nights in the secret penthouse maintained by Wolfe executives for partying and wild sex. She has higher aspirations though — she wants to be the next wife of the CEO. Tomalis has never actually participated in the in-office sexual activities, but Anastasia plans to seduce him by the end of the year.
Diana, a thirty-five-year-old single mother is frustrated with her current position as an executive assistant. Every time she approaches her boss, Bradford, about the possibility of a promotion, he makes her promises that he never keeps. Meanwhile, Edmund, a parking-garage attendant, has the hots for her, but she won’t give him the time of day. That is until two of her girlfriends drag her to a holiday cabaret and she discovers another sexier side to this blue-collar man.
The week leading up to the Wolfe Industries annual Christmas party is unforgettable, as the lives of four people who have barely interacted with one another in the past begin to cross paths in the most disturbing ways. By the time the party is over, they will be lucky if the skyscraper is still standing.

More books like Skyscraper: A Novel may be found by selecting the categories below: