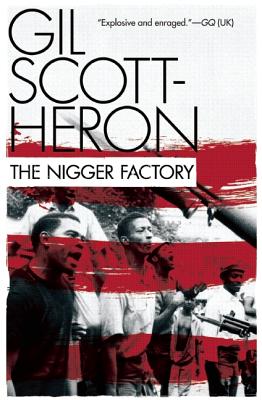 The Nigger Factory
by Gil Scott-Heron

Paperback Description:
Originally published in 1972, Gil Scott-Heron’s striking second novel, The Nigger Factory, is a powerful parable of the way in which human beings are conditioned to think, drawing inspiration from Scott-Heron’s own experiences as a student in the late 1960’s and early 70’s.

Earl Thomas, student body president at Sutton University, is in a difficult position: struggling with the fact that even a historically black college could be part of a system that still privileges whites, he’s also threatened by his fellow students, members of radical activist group MJUMBE. Claiming the time has come for revolution, not reform, the leaders of MJUMBE are poised not only to bring Earl down personally, but also to instigate larger scale acts of violence.

An electrifying novel, The Nigger Factory is a penetrating examination of the different forms of resistance and the motivations behind them, and a major document of an era of black thought.

More books like The Nigger Factory may be found by selecting the categories below: