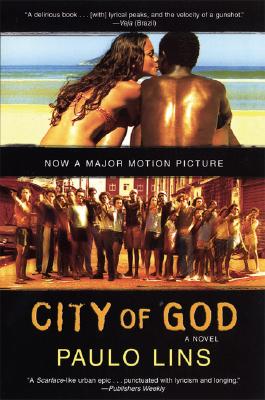 City of God: A Novel
by Paulo Lins

Paperback Description:
The searing novel on which the internationally acclaimed hit film was based, City of God is a gritty, gorgeous tour de force from one of Brazil’s most notorious slums. Cidade de Deus: a place where the streets are awash with narcotics, where violence can erupt at any moment over drugs, money, and love?but also a place where the samba beat rocks till dawn, where the women are the most beautiful on earth, and where one young man wants to escape his background and become a photographer. When City of God erupted on screens worldwide, it became one of the most critically and commercially successful foreign films of recent years. But few were aware of the story behind the film. Written by Paulo Lins, who grew up in the favela (shantytown) Cidade de Deus in Rio e Janeiro and who spent years researching its gang history, City of God began life as a coruscating, harrowing novelistic account of twenty years in the illicit pursuits of the youth gangs born from the favela. Now available in English for the first time, City of God is a raw, powerful portrait of the countless millions of poor people all over the world.

More books like City of God: A Novel may be found by selecting the categories below: