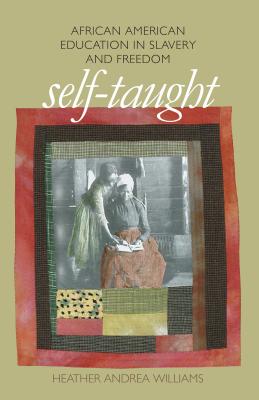 Paperback Description:
In this previously untold story of African American self-education, Heather Andrea Williams moves across time to examine African Americans’ relationship to literacy during slavery, during the Civil War, and in the first decades of freedom. Self-Taught traces the historical antecedents to freedpeople’s intense desire to become literate and demonstrates how the visions of enslaved African Americans emerged into plans and action once slavery ended. Enslaved people, Williams contends, placed great value in the practical power of literacy, whether it was to enable them to read the Bible for themselves or to keep informed of the abolition movement and later the progress of the Civil War. Some slaves devised creative and subversive means to acquire literacy, and when slavery ended, they became the first teachers of other freedpeople. Soon overwhelmed by the demands for education, they called on northern missionaries to come to their aid. Williams argues that by teaching, building schools, supporting teachers, resisting violence, and claiming education as a civil right, African Americans transformed the face of education in the South to the great benefit of both black and white southerners.

More books like Self-Taught: African American Education in Slavery and Freedom (The John Hope Franklin Series in African American History and Culture) may be found by selecting the categories below: