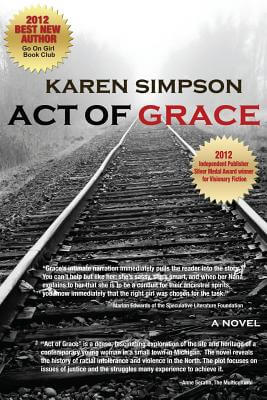 Act of Grace
by Karen Simpson

Paperback Description:
Why would Grace Johnson, an African American high school senior, take a bullet to save the life of a Ku Klux Klansman named Jonathan Gilmore? The question hovers unanswered over Grace’s hometown of Vigilant, Michigan. Few people, black or white, understand her sacrifice, especially since rumor has it years ago a member of Gilmore’s family murdered several African Americans including Grace’s father. Grace doesn’t want to talk about it, but the decision to speak is not hers to make. Ancestor spirits emerge to insist, in ways Grace cannot ignore, that she bear witness to her town’s violent racial history so that all involved might transcend it. With hindsight made telescopic by the wisdom found in African American mythology and the book The Velveteen Rabbit, Grace recounts a story of eye-for-an-eye vengeance that has blinded entire generations in her hometown. Faced with the horrific crimes that have disfigured her life, Grace wonders if in the end, she can do as the spirits have asked and lead Mr. Gilmore, the town of Vigilant and her own soul on a journey toward reconciliation, redemption and true grace.

More books like Act of Grace may be found by selecting the categories below: