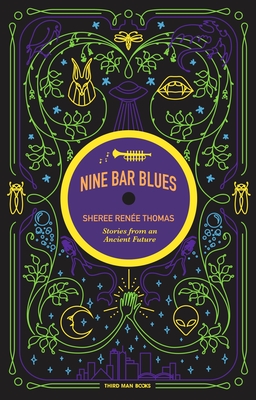 Individually, these tales explore nearly every genre of music that has formed the heart of American culture, but their shared song is the story of the blues. Thomas’s writing haunts and mesmerizes you. Her imagination takes you down through it like the best traditional blues song, then opens you up again, delivering you into that mysterious, transcendental space that is the ninth bar.

Haunting and evocative, Nine Bar Blues carries the soul’s songbook, from the dark laughter of strange sisters forced to make a perilous journey into a land their mothers have never known, to the fortified funk of extraterrestrial mixtapes.

Sheree Renée Thomas imagines stories that are sonic rituals, works that cultivate and affirm the magical and the mystical in everyday living. Nine Bar Blues explores the multitudinous forms of music and the people who make it and appreciate it—the body’s music, the spirit’s music, and what moves a soul forward in the crossroads journey of life. Her stories travel from haunted West African and Middle Eastern forests to the mysterious back roads in the Mississippi Delta, from the ancestral realms of the afterlife to the alien sounds beyond. And throughout the journey, Nine Bar Blues heralds the arrival of a unique writer whose voice carries the hope and the past-future-present of a people.

When Time Magazine published the article “It’s Not Just Black Panther: Afrofuturism Is Having a Moment,” they made sure to interview Sheree Renée Thomas. Already her impact as a member of the literary community has been undeniable and empowering. Thomas’ stories have received Notable Mention in the Year’s Best American Science Fiction & Fantasy and Honorable Mention in several volumes of the Year’s Best Fantasy & Horror, not to mention her editorial work has uncovered a legacy of over a century of Black science fiction writing and helped launch the careers of some of the most exciting new voices in the field. For instance, Thomas edited the two Dark Matter (Hachette) Black speculative fiction volumes that first introduced W. E. B. Du Bois’s work as science fiction, winning two World Fantasy Awards (2001, 2005). Despite these accomplishments, one must be reminded that Thomas is herself a new voice. Nine Bar Blues from Third Man Books is the debut fiction collection by Sheree Renée Thomas. The stories encompass the heart, spirit, and music of the Mississippi Delta and of Memphis, Tennessee, where she was born and currently lives. It is a much anticipated debut from a writer who has already left her fingerprint on the world of literature.

Books similiar to Nine Bar Blues may be found in the categories below: