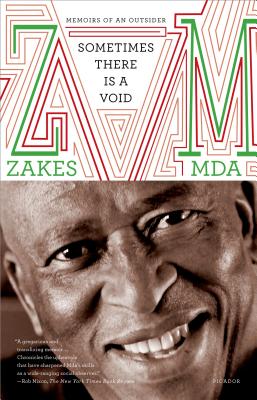 Sometimes There Is a Void: Memoirs of an Outsider
by Zakes Mda

"Moving, funny… Here is a man looking back on his life and country with joy and sorrow."?John Freeman, The Boston Globe

The most acclaimed South African writer of his generation, Zakes Mda eight novels venture far beyond the conventional narratives of a people’s struggle against apartheid. In this memoir, he tells of a life that intersects with the politics of his country?a story that is, at its heart, the classic adventure of an artist, lover, and bon vivant. Living in exile with his father in Basutoland (now Lesotho) during the first pangs of his country’s independence, a series of brutal and poignant initiations ushered him toward the life of a writer?and that of a perpetual outsider. Through the indignity of Boer racism, the turmoil of the Soweto uprisings, not to mention three marriages and his eventual immigration to America, Mda struggled to remain his own man. With Sometimes There Is a Void, he shows that independence opened the way for the stories of individual South Africans in all their variety.

More books like Sometimes There Is a Void: Memoirs of an Outsider may be found by selecting the categories below: