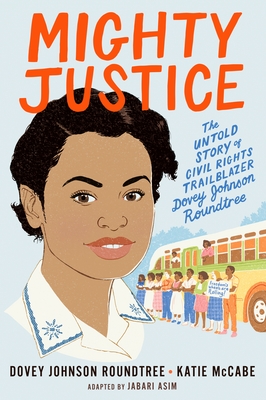 A young reader’s adaptation of Mighty Justice: My Life in Civil Rights, the memoir of activist and trailblazer Dovey Johnson Roundtree, by Katie McCabe.

Raised in Charlotte, North Carolina, in the heart of Jim Crow, Dovey Johnson Roundtree felt the sting of inequality at an early age and made a point to speak up for justice. She was one of the first Black women to break the racial and gender barriers in the US Army when women were barely allowed to serve; a fierce attorney in the segregated courtrooms of Washington, DC; and a minister in Black churches, where women had never before had the chance to speak. In 1955, Roundtree won a landmark bus desegregation case that eventually helped end "separate but equal" and destroy insidious Jim Crow laws across the South.

There are many key figures of the civil rights movement whose names don’t often appear in history books, those who fought hard for equality behind the scenes. Developed with the full support of the Dovey Johnson Roundtree Educational Trust and adapted by Jabari Asim from her memoir, this book brings her inspiring, important story and voice to life.

Dovey Johnson Roundtree was an attorney and minister who was of the first women to be commissioned an Army officer and who helped win a landmark case banning segregation in interstate bus travel. She died in 2018 at the age of 104.

Katie McCabe is a freelance writer whose work has appeared in the Washingtonian Magazine, Baltimore Magazine, and Reader’s Digest, among others. Her National Magazine Award-winning article on black medical legend Vivien Thomas was the basis for the HBO film Something the Lord Made, winner of three Emmys and a 2005 Peabody award. Jabari Asim is the author of several adult and children’s books, including Preaching to the Chickens which was named one of the New York Times Best Illustrated Books of 2016 and Fifty Cents and a Dream-an NAACP Image Award Nominee, Cooperative Children’s Book Center Choice, School Library Journal Editor’s Choice, and Kirkus Best Book. He is an associate professor at Emerson College in Boston and executive editor of The Crisis, the magazine of the NAACP. He recently was honored with a Guggenheim Fellowship. He lives in Newton, Massachusetts.

Books similiar to Mighty Justice: The Untold Story of Civil Rights Trailblazer Dovey Johnson Roundtree may be found in the categories below: