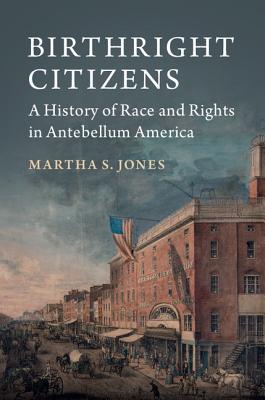 Birthright Citizens: A History of Race and Rights in Antebellum America
by Martha S. Jones

Book Description:
Birthright Citizens tells how African American activists radically transformed the terms of citizenship for all Americans. Before the Civil War, colonization schemes and black laws threatened to deport former slaves born in the United States. Birthright Citizens recovers the story of how African American activists remade national belonging through battles in legislatures, conventions, and courthouses. They faced formidable opposition, most notoriously from the US Supreme Court decision in Dred Scott. Still, Martha S. Jones explains, no single case defined their status. Former slaves studied law, secured allies, and conducted themselves like citizens, establishing their status through local, everyday claims. All along they argued that birth guaranteed their rights. With fresh archival sources and an ambitious reframing of constitutional law-making before the Civil War, Jones shows how when the Fourteenth Amendment constitutionalized the birthright principle, the aspirations of black Americans’ aspirations were realized.

More books like Birthright Citizens: A History of Race and Rights in Antebellum America may be found by selecting the categories below:

Tell us what do you think about Birthright Citizens: A History of Race and Rights in Antebellum America.