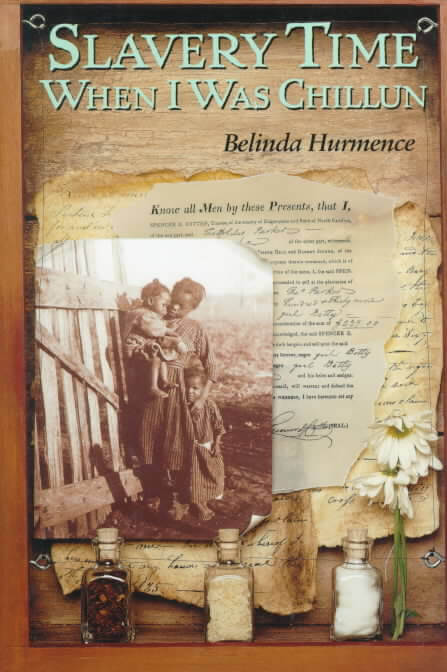 Slavery Time When I Was Chillun
by Belinda Hurmence

Book Description:
”Now that it’s all over, I don’t find life so good in my old age, as it was in slavery time when I was chillun, down on Marster’s plantation,” said James Bolton when he was interviewed as an old man in Georgia.

Not all memories of slavery were as good as Bolton’s, and this book shows many aspects of plantation life as seen through the eyes of men and women who were children when slavery came to an end, in 1865. Mingo White recounts how he was sent away from his parents when he was four or five, so that he didn’t recognize his mother when she came to find him. Tempie Durham tells of her wedding, at which she wore a white dress and veil and her mistress played the wedding march on the piano. Lucinda Davis talks about growing up as a slave to a Creek Indian family. Descriptions of children’s games contrast with accounts of brutal mistreatment, but most affecting of all are the stories of what it was like when slaves suddenly found themselves free to go where they pleased, after a lifetime of being the property of their masters.

Tell us what do you think about Slavery Time When I Was Chillun.