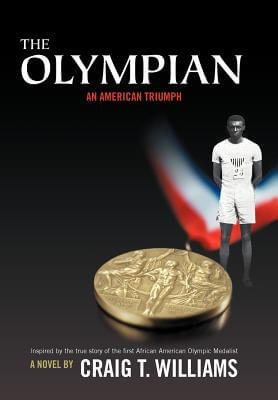 The Olympian: An American Triumph
by Craig T. Williams

Read Our Review of The Olympian: An American Triumph

Hardcover Description:
I dare greatly, and I shall live my life as no ordinary man bound by a game of chance. -John Baxter Taylor Jr. Running is his sacred ritual. As his legs gracefully carry him around the track at the University of Pennsylvania, he feels the wind in his face and freedom at his back. It is 1905, and John Baxter Taylor Jr. is three years away from representing the United States at the Olympic Games in England, where he will become the first African American Gold Medalist in Olympic Game history. Taylor has done everything in his power to live an uncommon life and defy those who dare to stand in his way. As he transforms himself from a skinny boy who licks at the heels of his fellow high school competitors while ignoring racial slurs to becoming one of the best quarter-milers in the world, he beats not only his competitors on the track but also shines academically, eventually earning a degree in veterinary medicine. In this compelling historical novel, the story of one man’s extraordinary life led by his unyielding determination to achieve his dream despite seemingly insurmountable obstacles will inspire you to remember that glory does not die, but is instead passed on to the next person willing to carry the torch in their heart.

More books like The Olympian: An American Triumph may be found by selecting the categories below: