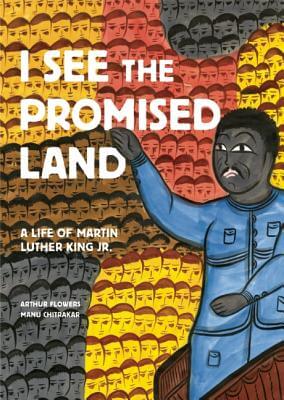 I See the Promised Land: A Life of Martin Luther King Jr.
by Arthur R. Flowers

Hardcover Description:This stunning graphic novel biography of Martin Luther King, Jr. describes the apartheid South of his time, which in many ways was not very different from the early days of slavery. Included are descriptions of the Montgomery Bus Boycott, the formation of civil rights groups, mass movements against segregation, such as the Albany Movement and the Children’s Crusade in Birmingham, and the influence on King of Gandhi, with his nonviolent approach to resistance. Flowers’ text smoothly incorporates excerpts from many of King’s most moving speeches and concludes with a brief look at his legacy. Flowers tells a masterful story in musical prose, while Manu Chitrakar carries the tale into the vivid idiom of Patua art, turning King’s historic journey into a truly universal legacy.

More books like I See the Promised Land: A Life of Martin Luther King Jr. may be found by selecting the categories below: