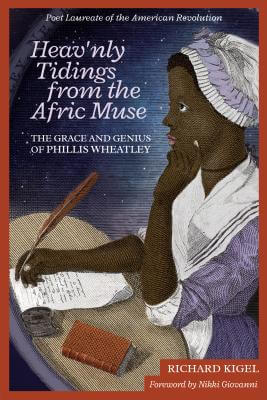 Heav’nly Tidings From the Afric Muse: The Grace and Genius of Phillis Wheatley Poet Laureate of the American Revolution
by Richard Kigel

She survived the horrific Middle Passage as a child and was purchased as a slave in 1761. By the time she turned twenty Phillis Wheatley became the most famous person of African descent in the world. In a culture dominated by white supremacy, she forced those around her to acknowledge her humanity and confront the inequity of her status as a slave. Heav’nly Tidings From the Afric Muse shows how Phillis Wheatley wrote her way to freedom. Developing previously unexplored material and adding new information with fresh perspectives, Heav’nly Tidings From the Afric Muse offers the opportunity to reevaluate the unique and significant role Phillis Wheatley played in the tumultuous birth of our nation. Insights by three centuries of Wheatley scholars and authentic statements by her contemporaries present a vivid picture of Phillis Wheatley in her time. Her own words, taken from her writings, resurrect the spirit of the classic poet who managed to launch two literary traditions at once, African-American literature and women’s literature. Now Phillis Wheatley can take her place among our Founding Fathers and Mothers as the true "Poet Laureate" of the American Revolution. In this stunning and comprehensive new biography of Phillis Wheatley published in time for Black History Month author Richard Kigel offers new insights into the poet’s incredible life and work, and the visions and words she had for her new country that still echo to this day. Kigel, a former Brooklyn public school teacher, realized during his teaching career that his students (as well as many Americans) didn’t know who Wheatley was. After years of research, he has written her story in fast-moving prose, including her poems throughout the book, as well as extensive citations from primary sources of the time. Among the Author’s findings and perspectives: • Phillis Wheatley was the only slave among untold millions who suffered the horrors of the Middle Passage whose arrival was documented?we know the name of the slave ship that brought her and the date and place of arrival in America. • The book argues that the famous “Wheatley Court” examination by 18 Boston men never happened. There is no evidence to support the mythical scenario that Phillis was quizzed by a panel of experts to test if she really wrote her works. • Phillis Wheatley’s London stay changed her life. The book presents a detailed description of her London travels taken from her letters that reveals how she earned her freedom. • Evidence that the first shipment of Phillis Wheatley’s books arrived from London on one of the Boston Tea Party ships. This is the first time evidence demonstrating that Phillis Wheatley’s shipment of books arrived on the Dartmouth along with 114 chests of East India tea has been documented. Her books were most likely on board the fateful night of the Boston Tea Party. • New evidence that the extraordinary March 1776 encounter between Phillis Wheatley and General Washington actually took place. • Details that Phillis Wheatley gave us our first popular symbol of America. The heavenly figure of Lady Columbia as a goddess in a flowing robe became a popular symbol of the American spirit which lasted until the mid-20th century. That a slave girl sold in chains on the auction block would grow to imagine the American spirit as the goddess in robes is a powerful reminder of Wheatley’s place in American history. • The book makes the case that Phillis Wheatley should be given serious consideration as “Poet Laureate” of the American Revolution. Her patriotic poems celebrate the American fight for freedom and helped create enduring images of the American imagination that still exist today. • The book asserts that Phillis Wheatley was the first public figure to embrace her identity as an African-American. She declared her African heritage proudly as “your vent’rous Afric,” “an Ethiop,” and “the Afric muse.” Her decision to return to Boston from London, where she was legally free, provided clear affirmation that Phillis Wheatley saw her future as an African-American poet. The result is an engrossing biography for both adult and young adult readers a book that places Phillis Wheatley in her rightful place among our Founding Fathers and Mothers, and as an iconic figure in African-American history as important as Harriet Tubman, Rosa Parks, and Martin Luther King.

More books like Heav’nly Tidings From the Afric Muse: The Grace and Genius of Phillis Wheatley Poet Laureate of the American Revolution may be found by selecting the categories below:

Tell us what do you think about Heav’nly Tidings From the Afric Muse: The Grace and Genius of Phillis Wheatley Poet Laureate of the American Revolution.