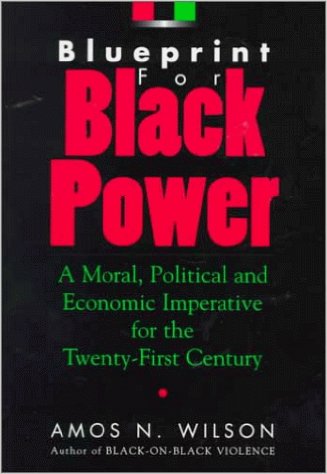 Blueprint for Black Power: A Moral, Political, and Economic Imperative for the Twenty-First Century
by Amos N. Wilson

Afrikan life into the coming millenia is imperiled by White and Asian power. True power must nest in the ownership of the real estate wherever Afrikan people dwell. Economic destiny determines biological destiny. Blueprint for Black Power details a master plan for the power revolution necessary for Black survival

in the 21st century. White treatment of Afrikan Americans despite a myriad of theories explaining White behavior, ultimately rests on the fact that they can. They posses the power to do so. Such a power differential must be neutralized if Blacks are to prosper in the 21st century.

Afrikan Americans earn a take-home salary of near $500 billion yearly, not to mention the millions they generate. Yet they retain only 5% of this income. Viewed as a nation, their economy would be the 8th to 9th largest in the world! Afrikan Americans possess enourmous potential to amass effectual social, political and economic power and this control their destiny and secure their liberation. Professor Wilson argues thata were the Africkan American community to see itself as indeed a de facto nation, then its scourges of poverty, disemployment, crime, mis-education, wanton consumerism, alienated/deficit spending, mis-leadership and powerlessness would be drastically reduced, if not eliminated.

A ptly titled, Blueprint for Black Power stops not at critique but prescribes radical, practical theories, frameworks and approaches for true power. It gives a biting look into Black potentially. This 900-page treatise is a journey into the protracted.

Books similiar to Blueprint for Black Power: A Moral, Political, and Economic Imperative for the Twenty-First Century may be found in the categories below: