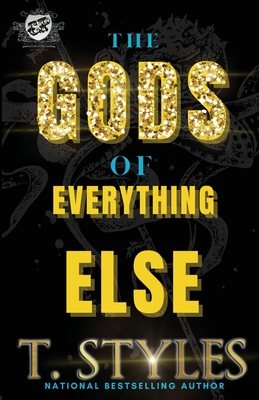 The Gods of Everything Else: An Ace and Walid Saga (the Cartel Publications Presents)
by T. Styles

The sins of the fathers shall be visited on the sons…

Now eighteen, twins Ace and Walid Wales are grown men. Born to the billionaire Banks Wales, it quickly becomes obvious that paradise is not heaven on earth for Ace when he feels the pressure of his overbearing father.

After a brutal incident on their private island, Banks applies pressure which sends Ace’s already volatile behavior out of control.

To make matters worse, the youngest generation, Blakeslee, Riot, Bolt and Patrick are taking notice and it’s obvious if things aren’t reigned in, he will eventually spoil the bunch.

Unable to take Banks’ rules anymore, Ace orchestrates a move that threatens the lives of the Wales and Louisville generation.

The Gods Of Everything Else, reintroduces Ace and Walid while also catching up with Banks and Mason as they struggle to keep their family together…AGAIN

Books similiar to The Gods of Everything Else: An Ace and Walid Saga (the Cartel Publications Presents) may be found in the categories below: