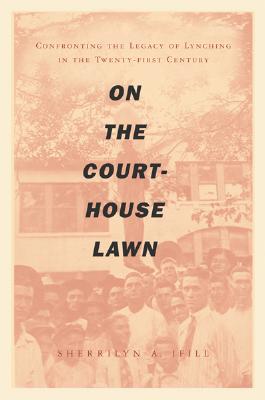 On the Courthouse Lawn: Confronting the Legacy of Lynching in the Twenty-first Century
by Sherrilyn A. Ifill

Hardcover Description:
Nearly 5,000 black Americans were lynched between 1890 and 1960. Over forty years later, Sherrilyn Ifill’s On the Courthouse Lawn examines the numerous ways that this racial trauma still resounds across the United States. While the lynchings and their immediate aftermath were devastating, the little-known contemporary consequences, such as the marginalization of political and economic development for black Americans, are equally pernicious.

On the Courthouse Lawn investigates how the lynchings implicated average white citizens, some of whom actively participated in the violence, while many others witnessed the lynchings but did nothing to stop them. Ifill observes that this history of complicity has become embedded in the social and cultural fabric of local communities, who either supported, condoned, or ignored the violence. She traces the lingering effects of two lynchings in Maryland to illustrate how ubiquitous this history is and issues a clarion call for American communities with histories of racial violence to be proactive in facing this legacy today.

Inspired by South Africa’s Truth and Reconciliation Commission, as well as by techniques of restorative justice, Ifill provides concrete ideas to help communities heal, including placing gravestones on the unmarked burial sites of lynching victims, issuing public apologies, establishing mandatory school programs on the local history of lynching, financially compensating those whose family homes or businesses were destroyed in the aftermath of lynching, and creating commemorative public spaces. Because the contemporary effects of racial violence are experienced most intensely in local communities, Ifill argues that reconciliation and reparation efforts must also be locally based in order to bring both black and white Americans together in an efficacious dialogue.

A landmark book, On the Courthouse Lawn is a much-needed and urgent road map for communities finally confronting lynching’s long shadow by embracing pragmatic reconciliation and reparation efforts.

?Professor Ifill has written a sobering and eye-opening book on one of America’s darkest secrets. On the Courthouse Lawn offers a compelling examination of lynchings and describes the failure of people and institutions to adequately address one of America’s tragedies. Racial amnesia would suggest we forget this history. Professor Ifill assures us that we cannot?and should not?forget it. This is a must read for anyone willing to examine our history carefully and learn from it.” ?Professor Charles J. Ogletree, Jr., Jesse Climenko Professor of Law, Harvard Law School, and executive director of the Charles Hamilton Houston Institute for Race and Justice

?On the Courthouse Lawn is an elegantly written and persuasively argued case for local communities to confront their history of lynching and racial violence as a means of healing race relations. Explaining how Truth and Reconciliation worked in South Africa, Ifill explores the possibilities and offers concrete advice on how it could be widely employed in the United States. It is certainly worth trying.” ?Mary Frances Berry, Geraldine R. Segal Professor of American Social Thought and professor of History, University of Pennsylvania

?In calm, objective but no less moving detail, Sherrilyn Ifill’s book provides the stories that illuminate the photographs and postcards of lynchings, the punishment meted out to some 5,000 black people deemed guilty without trial for matters large and small during the first half of the twentieth century. Too late for justice for the victims of lynch law, Professor Ifill urges that an American version of South Africa’s Truth and Reconciliation Commission could bring long-denied acknowledgment to whites and a measure of consolation to blacks.” ?Derrick Bell, author of Faces at the Bottom of the Well and Ethical Ambition

Books similiar to On the Courthouse Lawn: Confronting the Legacy of Lynching in the Twenty-first Century may be found in the categories below: